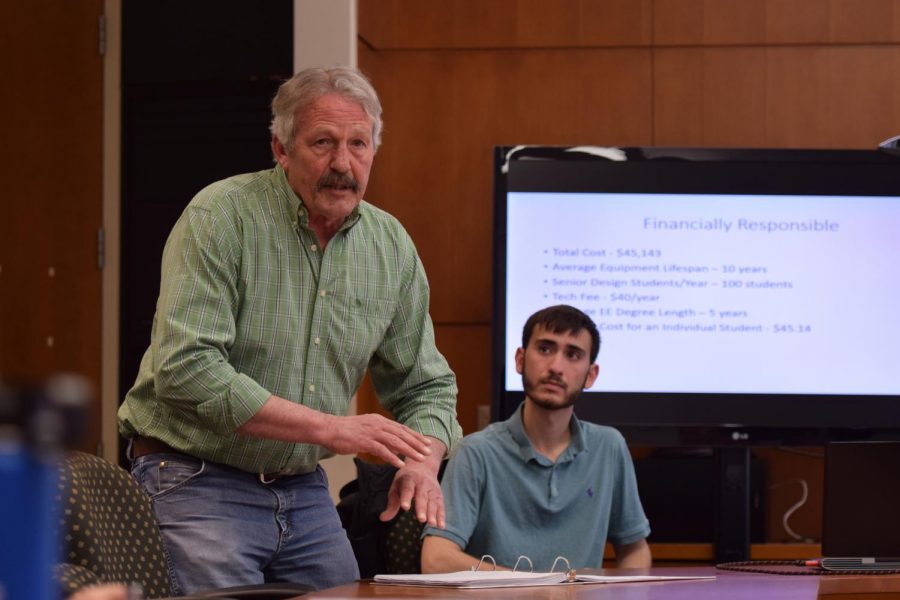 John Yates, school of electrical engineering and computer science engineering manager, discusses the need for technology upgrades during the Student Technology Fees Hearing on Tuesday at the CUE.

This article has been updated to reflect the correct proposal for the electrical engineering and computer science school. Students already pay a $40 fee for this; Cevetello was proposing to continue the fee for the future.

Lukas Cevetello, a representative for the electrical engineering and computer science school, presented a proposal to continue the $40 technology fee students pay each year, in order to to update some of their technical equipment.

There would be a fee of about $40 a year for each student if the proposal is approved, Cevetello said. This fee is already paid by students, but the proposal was its continuation.

Richard Rupp, information systems coordinator for the crop and soil sciences department, proposed a request to the committee for Amazon WorkSpaces, a cloud desktop service.

Online students would pay about $50 per semester to cover a fee if the request is approved by the committee, Rupp said.

Sara Quenzer, a representative for the English department, requested funding for computer updates at the Avery Microcomputer Lab.

“Without funding, hardware failures will continue to occur,” Quenzer said.

Jake Kargl, a representative for the music school, requested funding for renovations to the Kimbrough Concert Hall.

Colby Weil, a representative for the college of veterinary medicine, presented a proposal to request a technology upgrade for classroom 202 in McCoy Hall.

Heiko Jansen, associate professor for Integrative Physiology and Neuroscience, said the projector in classroom 202 is slow to display images to other monitors.

Darlene Neunherz, director of space and facility management for the Voiland College of Engineering and Architecture, presented a proposal for ubiquitous internet connection for Sloan Hall.

Robert Belter, president of WSU Esports club, presented a proposal to request funds to purchase 12 PC consoles for student use.

Other clubs at WSU would be able to use the room for team-building exercises or other purposes, Belter said.

“We also want to use the space as a platform for intramural teams,” he said.

Trevor Foote, representative for the physics and astronomy department, presented a proposal to request funding to decrease light pollution by changing out street lamps on Grimes Way with Cree brand lights, which are commercial and industrial LED lights.

“Light pollution obstructs the visibility of stars,” he said.

Foote also said he would like increase accessibility to the Jewett Observatory.

Chamithri Adikarige, secretary of the physics and astronomy club, said they also hoped to increase the accessibility of the observatory by installing infrastructure to provide internet access, which is currently unavailable.