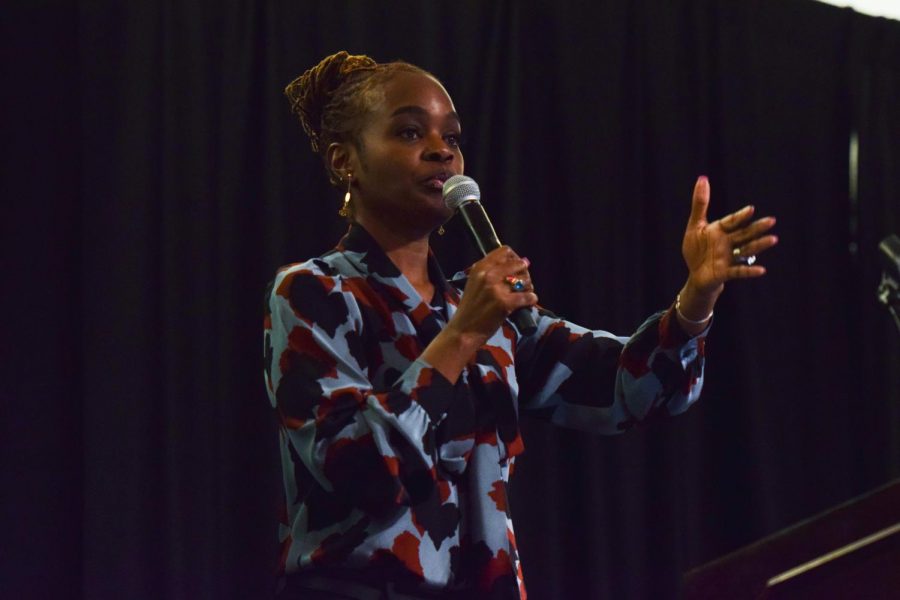 Dr. Alfiee M. Breland-Noble discusses how people of Black and Latinx ethnicity tend to have lower rates of participation in therapy on Wednesday in the CUB Senior Ballroom. Breland-Noble states that there is a stigma against it.

A counselor from Georgetown University Medical Center presented her talk on “Understanding Global-Historical Context and Complexity of Mental Health and Depression Disparities in the Black Youth” in the CUB Senior Ballroom on Wednesday night.

Dr. Alfiee M. Breland-Noble worked as a counselor at Duke University. She began the presentation explaining that history is never fully in the past, and it is contemporary.

“We had something called tracking,” Breland-Noble said. “Tracking when you’re little is like the bluebirds, jaybirds and the blackbirds, and guess who was the lowest, the blackbirds.”

Breland-Noble said the main reason African-Americans are scared to get help for their mental issues is because of cultural mistrust.

She said the differences in the way people grow up generation by generation is why this cultural mistrust is prevalent in mental health issues.

“People don’t go, especially people of color,” Breland-Noble said. “I know what people my age said, because they’re my best friends, nobody is going in for help.”

Alexandra Scheele, WSU architecture freshman, said she learned about this lecture in her History 105 class. She wanted to learn something new and get a different perspective of the topic.

“I want to learn about a new experience or context or information about the topic,” Scheele said.

Drew Misemer, a WSU senior majoring in history, said he heard about this presentation in his capstone class, in the hallways and passing around campus.

“I really want to look for fresh perspectives on this certain topic,” he said. “These presentations are sometimes enlightening on certain aspects that you don’t really get in Pullman.”

“Part of what we are trying to do is to eradicate the stigma, and get some people some help,” she said.

Breland-Noble said the background of African-Americans can be defined as the people who are descendants of enslaved Africans who were brought to this country.

She said the background of these people can be defined as the African Diaspora, like the Caribbean, Latin countries and Samoan countries.

“If you have an idea that’s important to you, and you believe in it, you need to stick with it,” she said.