Support makes it possible to lead 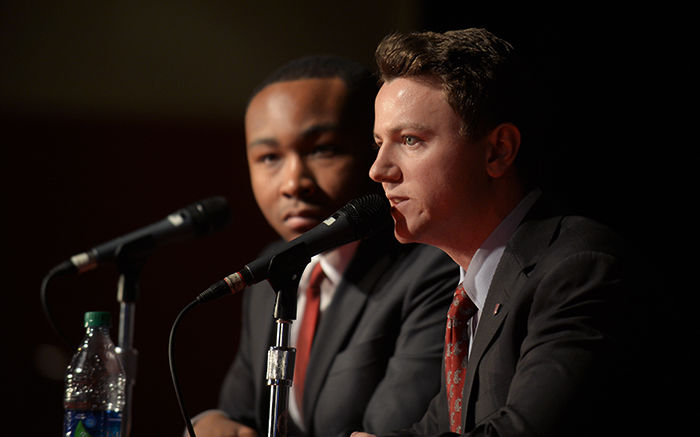 ASWSU Vice President Garret Kalt, right, and President Jordan Frost participate in a presidential debate on Feb. 5 in the CUB.

The name Garrett Kalt made its way around campus during ASWSU campaigning and elections, and the reputation attached to that name traveled with it. During the election season and his time here at WSU, Kalt seems to have made an impact on the student body, as his fellow Cougs voted him best student leader.

Kalt grew up in a small town in Nevada, and thus community became an essential aspect of his life. Both his parents held leadership positions, his mother a teacher and his father a public accountant, with poise and an ability to stay humble, which Kalt said influenced him later in life.

“I love always having the chance to represent people,” Kalt said. “Leadership to me is about making connections with people and making sure their voices are heard, and connecting people to each other.”

Associate Director of Leadership Rudy Trejo has worked as Kalt’s Senate adviser for two years and attributes his Students Choice Award win to his good heart and core desire to be a good person.

“People know Garrett, and they know his name and know his reputation, which I think is why he won this award,” Trejo said. “Ultimately, I think the reason he won is because he’s a good guy and he’s not flashy about it.”

Kalt lives by the quote “leaders don’t make followers, they make more leaders.” He said he believes leadership is a team effort, so making sure everyone feels like they can contribute and have their voice heard is important to him.

“I’m really honored and humbled that people saw this in me, and I couldn’t do this without all my great support systems,” Kalt said. “I’m really looking forward to challenging myself and doing what I can to better the student body next year and helping individuals learn and grow along the way.”