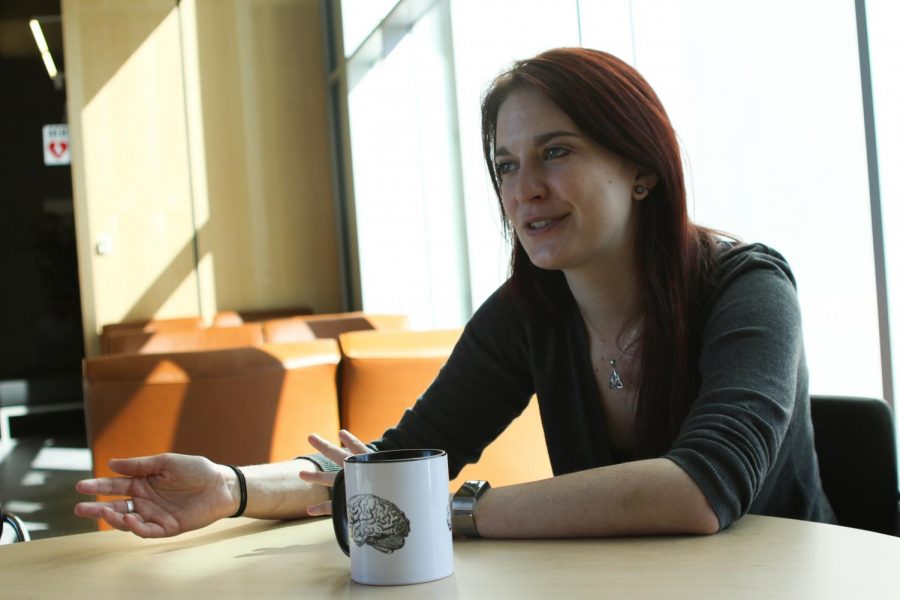 Naomi Wallace, the system-wide 3MT winner in 2018, speaks to the importance of the Three Minute Thesis and how it has benefited both her and the university on Tuesday at the Veterinary and Biomedical Research Building.

WSU doctoral students will compete against one another in WSU’s Three Minute Thesis (3MT) competition on March 27.

In 3MT, competitors must present their research in three minutes to a panel of judges from the Pullman community, said Dan Bernardo, WSU provost and executive vice president.

The competition will take place at 1 p.m. in the atrium of The Spark: Academic Innovation Hub, and the event is free.

Bernardo said 3MT improves the skills graduate students need to communicate their research. He said they need to evaluate the research they are conducting and explain it clearly to those who do not specialize in science.

“It makes students step back from their research … [because] they can be deep in the weeds,” he said.

Departments within WSU host their own 3MT events, and winners qualify for WSU’s system-wide competition, he said. Those who win in the departments’ competition are awarded $500 of travel money for research conferences.

“I’ve been looking at some conferences in Australia,” said Chloe Erikson, the college of veterinary medicine’s winner and participant in the upcoming system-wide competition.

Erikson said she will present her thesis regarding the genetic contribution in the cerebellum to potential alcohol addiction. She said when creating her presentation for 3MT, it was essential to construct an exciting story that anyone on the street would want to hear.

“I was trying to create an impactful story about how alcoholism is impacting people in the U.S. …  and how treatment [for alcoholism] doesn’t look at the cerebellum,” she said.

Naomi Wallace, the system-wide 3MT winner in 2018, said doctoral students can positively influence WSU’s Drive to 25 initiatives through their presence at conferences. Wallace said it is significant when WSU students talk to other graduate students because it puts the university on the map.

“Having a good reputation and good visibility is always going to be helpful,” Wallace said.

She said it is easy for scientists to become consumed in their field of research, and they forget how to describe it to an average person. 3MT forces them to explain their thesis concisely and simply, which will benefit them in the future, she said.

There will be nine competitors in 3MT, and departments that are participating include Carson College of Business, College of Arts and Sciences and College of Education.

The College of Education began hosting 3MT in spring 2014, which was expanded to all WSU campuses a year later, Bernardo said.