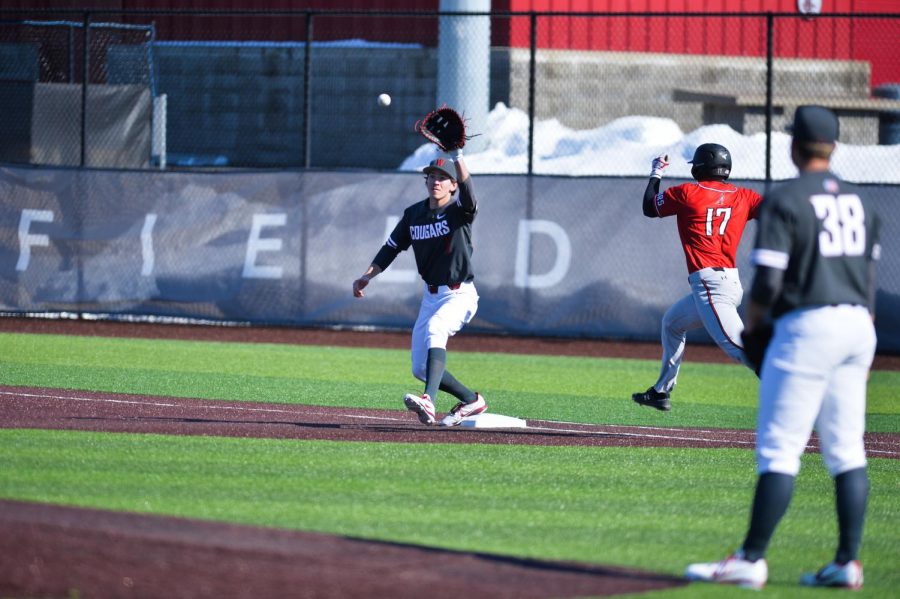 Junior infielder Dillon Plew catches a ball at first base in the game against Cal State Northridge on March 10 at Bailey-Brayton Field.

Cougar baseball lost their eighth game in a row as No. 22 UC Irvine completed a three-game sweep of WSU with an 8-4 victory Sunday.

WSU’s bats came out firing in the first inning when it took a 2-0 lead. Senior catcher Rob Teel and sophomore outfielder Collin Montez knocked in the two runs and the Cougs already had four base hits.

Sophomore right-handed pitcher Hayden Rosenkrantz took the mound for the Cougars and retired the first three hitters he saw with ease to give the Cougars the early momentum.

The Cougars quieted down on offense in the second inning but still maintained a 2-0 lead after UC Irvine still hadn’t figured out how to hit off Rosenkrantz.

Through three innings, Rosenkrantz was the definition of dominant with three strikeouts and just one hit. The Anteaters had no answers on offense.

In the top of the fourth, Teel and Montez reached safely, and senior infielder Andres Alvarez grounded out to advance them to scoring position. Freshman outfielder Koby Blunt would also ground out, but Teel scored to give WSU a 3-0 lead.

In the bottom of the fourth, UC Irvine answered right back with a two-run home run to left-center field, trimming the lead to 3-2.

Despite giving up three runs through five innings, Anteaters sophomore right-handed pitcher Trenton Denholm had seven strikeouts to his name and no walks.

Freshman right-handed pitcher Zane Mills relieved Rosenkrantz after four innings and struggled right off the bat. Mills’ poor pitching, a couple of errors and multiple base hits allowed UC Irvine to score four runs. The Anteaters took a 6-3 lead, and Mills was replaced by sophomore left-handed pitcher Bryce Moyle after giving up four runs, two hits and one walk without recording an out.

WSU would gain a run back in the seventh inning when freshman infielder Kodie Kolden singled to left field to score Alvarez and cut the Anteaters lead to 6-4.

UC Irvine seemed to respond to every run WSU got across the board as they scored yet again in the bottom half of the seventh after a couple of singles, a passed ball and a sacrifice bunt increased its lead to 8-4.

The Cougs wouldn’t produce any more offense for the rest of the game as they were swept by UC Irvine.

WSU will battle Loyola Marymount 2 p.m. on Monday in Los Angeles for one game before returning to Pullman for a three-game series with Stanford this weekend.