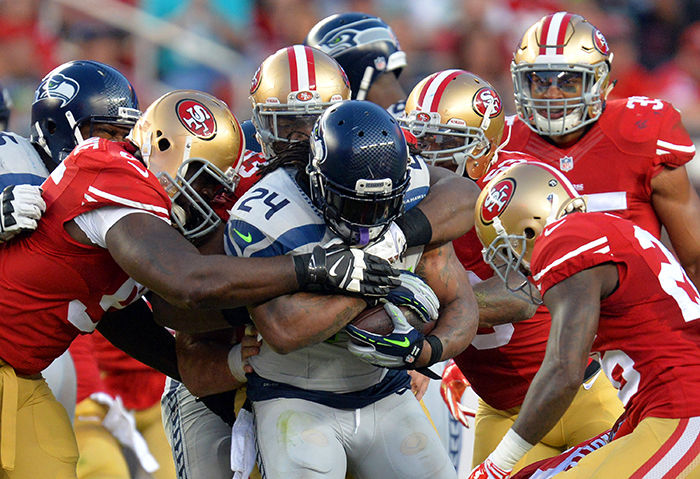 Although Marshawn Lynch may not be a household name, most casual sports fans crack a smile when they hear the words “Beast Mode.”

When Lynch was acquired by the Seattle Seahawks from the Buffalo Bills three games into the 2010 regular season, he was not a marquee NFL player. The running back was probably most known for the time he drove an injury golf cart around the field in a game against the University of Washington when he played for the University of California, Berkeley.

Though Lynch went through light off-the-field issues in his time with Buffalo, missing three games due to violating the personal-conduct policy in 2009, these questions of character did not follow him to the Pacific Northwest.

During Lynch’s time with the Seahawks, he was a fan favorite of the “12th Man.”

Lynch’s legacy was sealed in the fourth quarter of the 2011 NFC Wild Card game on Jan. 8 against the New Orleans Saints at Qwest Field (as it was known at the time) in Seattle. This game will go down in the record books and memories of Seahawks fans everywhere as the day of the infamous “Beast Quake.” An earthquake was registered on the local seismograph due to fans making so much noise, as the NFL’s loudest fan base literally shook the stadium.

Fans will remember the “Beast Quake,” the 67-yard run in which Lynch broke nine tackles en route to the end zone, as perhaps the greatest run in NFL history, and certainly the most dramatic.

Those who were lucky enough to witness the event live will one day bounce their grandchildren on their knees as they recall the time Lynch stole Darren Sharper and all Saints fans’ souls. The fans will reminisce as they roast marshmallows around the campfire about the time Lynch cold-heartedly stiff-armed Saints player Tracy Porter into “YouTube purgatory.”

Not only was the “Beast Quake” a moment memorialized in the hearts of all Seahawks fans, it was also the definitive play of Lynch’s career.

He would go on to make a similar 79-yard run against the Arizona Cardinals in 2014 in what some may call “Beast Quake 2.0,” the original “Beast Quake” is the kind of moment that can never be repeated. The stakes of the play add to the mystique, as just a few minutes remained in a tightly knit playoff game at the time.

Lynch will not only be remembered in the Pacific Northwest for the “Beast Quake,” but also for his consistency on the field.

Lynch rushed for four-straight 1000-yard and double digit touchdown seasons from 2011-2014. Whenever people discuss the 2015 Super Bowl, Lynch’s name will always come up, as he was just a shoestring away from sealing a back-to-back Super Bowl victory for the Seahawks before New England Patriot Malcolm Butler ripped Seahawk fans’ hearts out.

Though Lynch reportedly may be making a comeback with the Oakland Raiders, he will live on throughout the region for his colorful, good-natured personality and his love of the sport and his teammates. Wherever life takes Lynch next, it’s likely he will always take a minute to taste the rainbow.

Chris Arneson is a senior sports management major from Bothell, Washington. He can be contacted at 335-2290 or by desports@dailyevergreen.com.