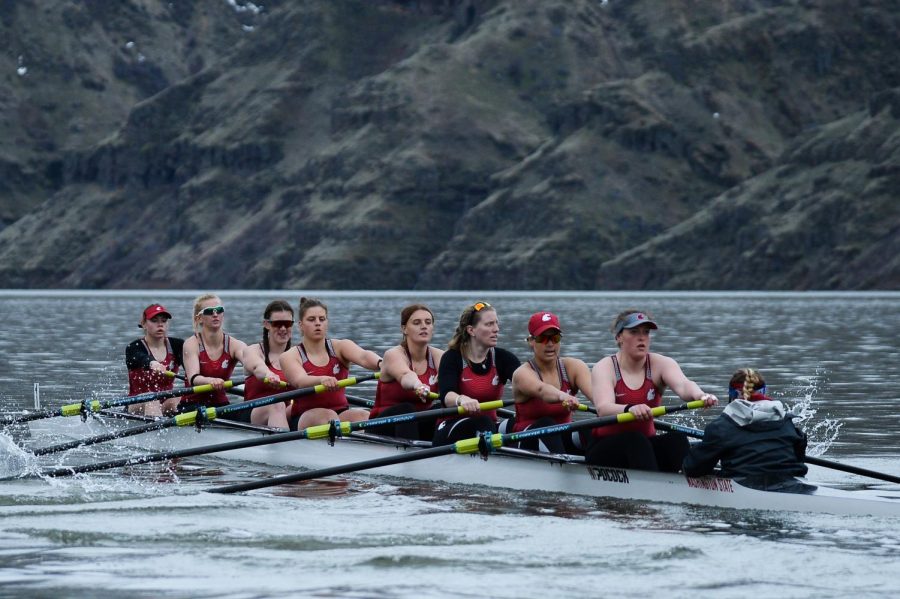 WSU rowing’s second varsity eight races Sunday morning on the Snake River. The Cougars finished third with a time of 7:00.2.

WSU rowing hosted its first regatta of the spring season Sunday on the Snake River at Wawawai Landing.

Head Coach Jane LaRiviere said she thought everyone was excited to race.

“You know, it’s just like being a fireman. You can only spend so much time polishing your equipment before you have to go race,” LaRiviere said.

Gonzaga, Oregon State, Loyola Marymount and Seattle Pacific competed against WSU. The Beavers and Cougars were battling for the Winchell Cup and the Crawford Plate.

The Beavers posted a time of 6:52.7 to claim the second varsity eight, and Gonzaga finished under five seconds behind them in second. WSU placed third at 7:00.2, and Loyola Marymount took fourth.

In the third varsity eight, the Cougars grabbed a first-place finish posting a time of 7:02.62, nearly 11 seconds faster than second place OSU.

The Beavers defeated WSU by over nine seconds to claim the first varsity four with a time of 7:26.05. WSU followed at 7:35.74, Gonzaga placed third and LMU secured fourth.

OSU also won the second varsity four with a time of 7:36.16, over 21 seconds faster than the second place Cougars.

“I think we can build a faster boat somewhere out of those people,” LaRiviere said.

The Cougars will now shift their focus to the San Diego Crew Classic April 6-7 at Mission Bay in California.

“We just need to get a few more weeks of training under our belt,” LaRiviere said.