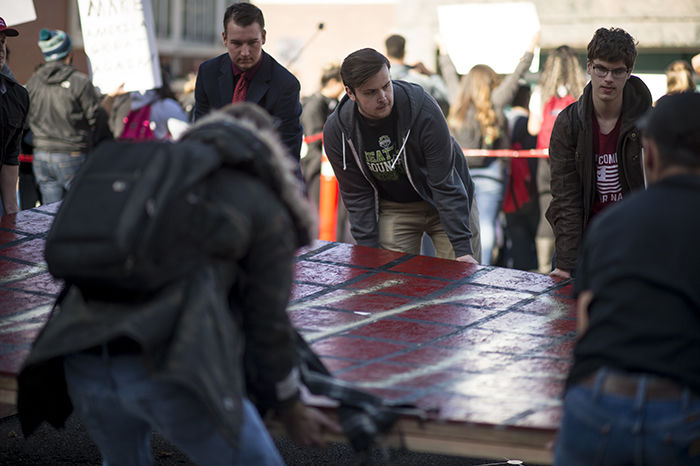 The College Republicans built an imitation border wall on the Glenn Terrell Friendship Mall on Oct. 19.

The WSU College Republicans put on a variety of events this school year, covering some of today’s most controversial political issues and creating debate among students.

James Allsup, the College Republicans president since December 2015, said the club sees on average about 30 to 40 students in attendance at meetings and events.

This year, the club hosted events such as bringing Carol Swain, a famous political scientist, to WSU this month with the help of the Foley Institute. They also planned to bring controversial speaker Milo Yiannopoulos to campus in January. However, the event was canceled last-minute because of weather.

“That would have been our biggest event by far this year,” Allsup said.

During the fall semester, the club built a wooden replica of President Donald Trump’s proposed wall along the U.S.-Mexico border on the Glenn Terrell Friendship Mall. The demonstration drew many student protesters.

Jacob Heinen, the College Republicans vice president during the 2016 fall semester, said at the time the wall demonstration was going on that it was supposed to spark productive conversation about immigration reform. Allsup at the time said it was a successful event and received a lot of positive attention.

During the U.S. 2016 presidential election, College Republican members walked around campus trying to gain support for their “Hillary for Prison” campaign. Allsup said they drew the support of a lot of people from a variety of political beliefs.

“Our mission as a club is to promote intellectual conversation, spark debate and promote conservative and Republican ideas on campus,” Allsup said.

He said that when he first came to WSU, he thought College Republican members were all very involved in politics and campaigns, but found that not to be completely true.

“Most of the people that come to get involved are not super political,” he said.

Many club members joined because of its cultural aspect, Allsup said, and enjoy being a part of an environment that lacks cultural policing.

“It’s a club where people can make a joke without offending people,” he said.

Allsup said many members are interested in becoming involved in politics after graduating, and the club has a good relationship with the office of Congresswoman Cathy McMorris Rodgers.

“I communicate with people from their office on a fairly regular basis,” Allsup said.

In the past, WSU College Republican members have received internships and jobs working for the McMorris Rodgers campaign team and office, he said.

“People do get involved when they want,” Allsup said.