Try knitting for your mental health 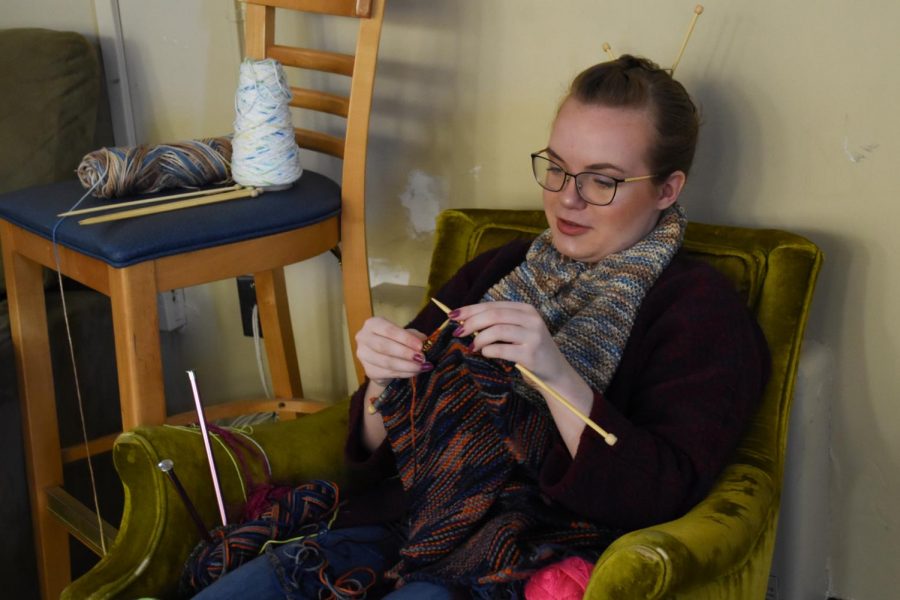 This columnist feels learning to knit improved her life. It helps her connect with people in more meaningful ways and get in the zone.

On March 3, I learned to knit. I bought some cheap knitting needles, a skein of blue yarn and spent an hour struggling with my first row.

I didn’t suddenly age 40 years nor decide I wanted to follow in my grandmother’s footsteps. I wanted to treat my depression.

I was inspired to pick up the handcraft from the wise words of Tumblr user Higgsboshark.

My struggle with depression and anxiety has spanned most of my young adult life. I didn’t realize it wasn’t normal for a 16-year-old to be so disinterested in her hobbies that she’d rather spend time hiding in bed for hours. It wasn’t until I made it to Pullman and no longer had a support system that I realized something had to change.

I’ve been on antidepressants for two years, and sometimes I praise them because they help regulate the dopamine and serotonin levels in my brain. Other times I feel no different. After a particularly hard few weeks of feeling completely helpless, I needed a change.

I didn’t want to go through the hassle of adjusting my meds without insurance, a whole different can of worms in itself, so I decided on something new — knitting.

Scott said the WSU Psychology Clinic uses several psychological methods to treat depression that are just as effective as antidepressants at reducing depressive symptoms. One is behavioral activation which focuses on filling an individual’s schedule with activities that fit with their values and interests to give them a sense of engagement, he said.

“Your initial thought when you’re chronically depressed is the activity isn’t going to be much fun,” Scott said. “So you tend to see a reduction in engaging in activities that give you a sense of mastery and reward in depression.”

Handcrafts like knitting, crocheting and cross stitch, after the initial learning curve, are engaging and feel rewarding as you’re making something for yourself or someone else to enjoy.

Another psychological method is finding the optimal psychological state, called ‘flow,’ and staying in it as often as possible. The state of flow comes when people are engaged in moderately challenging activities that require some development of skill and are receiving second by second feedback on how they’re doing, like playing an instrument, rock climbing or knitting.

“In flow, you get lost in the activity and are not as mindful of time,” Scott said. “People describe that they lose the self but kind of paradoxically the self feels stronger after, even though during the activity they had no self-awareness and they weren’t reflecting on the self.”

Scott said losing the self can be a great treatment for depression because depressed people can get in rumination mindsets which can be detrimental.

The first is relatedness, a sense of connection to the people around you. The second is autonomy, control rather than coercion. The third is mastery, a sense of confidence and being effective.

“It’s really frustrating to us when we feel powerless and ineffective,” Scott said. “Any activity that gives you that sense of mastery or effectiveness is a very strong antidote to feeling depressed.”

My first scarf, I will admit, is quite horrible. I only knew the technical components to what I was doing and didn’t understand the theory behind scarf-making. I didn’t understand that splitting the yarn to create an extra stitch was a bad idea, which resulted in a vaguely phallic-shaped scarf.

Soon though, my knitting on airplanes, in between classes and in front of family friends taught me more. I knew more people who knitted, crocheted or cross-stitched than I could have imagined. I received countless tips and tricks and even some free yarn to add to my collection.

Knitting does wonders for the brain, but also automatically gave me something more in common with a near stranger from a few classes or from the flight attendant on the airplane. I’ve never felt closer to my best friend’s mom than when I planned the scarf I’ll be making for her. I get excited when I’m home from class every day because I get to work on my dad’s 2019 Christmas present.

I’ve never used my phone less than I have in the 24 days I’ve been knitting, yet I’m more connected to the people who matter most to me than ever. I feel less hopeless and like my existence is making the world better for the first time in my life.

Three weeks ago, I picked up a handcraft after reading a Tumblr post and it saved my life.