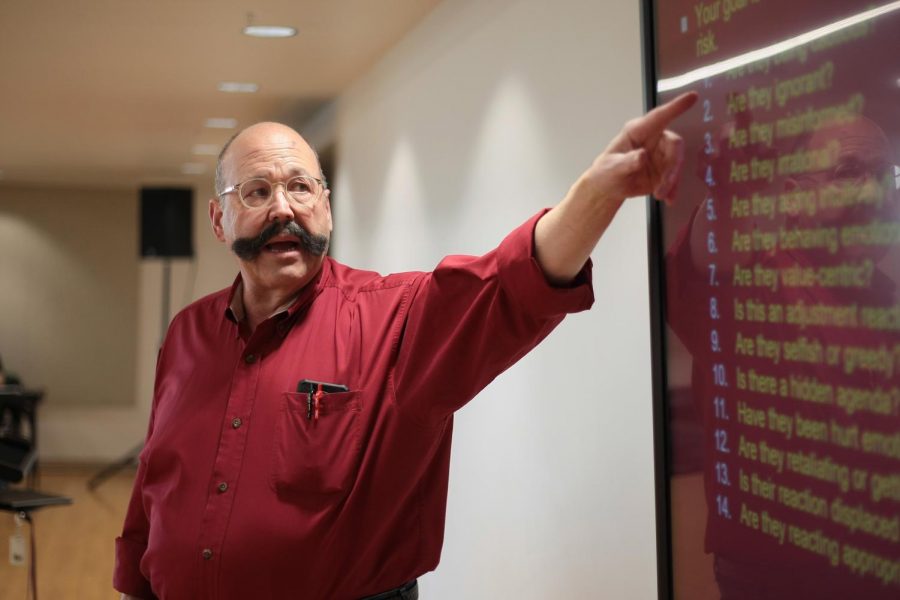 Charlie Powell, public information officer for the college of veterinary medicine, says it is important to strengthen peers who might be affected by certain situations during a training held Tuesday afternoon at the Chinook.

Sgt. Dawn Daniels, of the WSU Police Department, said she helped organize the session, which is the first for students.

“We are starting to see more programs that are controversial, and we think this would help students navigate through these kinds of situations in school and in life,” Daniels said.

Charlie Powell, public information officer for the college of veterinary medicine, spoke about how to observe for critical signs of possible violent situations and how to be better equipped in managing those situations.

Powell said the session was held to address the WSU College Republicans’ plan to build a replica of the proposed border wall between the U.S. and Mexico, as well as other events on campus that could attract a crowd.

“The best skill is to not engage,” he said, “discipline yourself. You won’t change their minds.”

He said it is important to strengthen peers who might be affected by events like these so they do not intervene with those situations.

Powell said the best course of action for students is to be aware of the situation and its possible outcomes.

“The only person you have control over is you,” he said.

There have been numerous examples of people who were asked provocative questions on camera in an attempt to get a rise out of them, he said.

“They’re looking to exploit you by putting it out on social media,” Powell said. “They can do this because you have no expectation of privacy in public settings and they might misrepresent you.”

He also spoke about skills students could use to de-escalate situations in controlled settings such as being aware of nonverbal and verbal cues. Powell said when people have unmet needs, blocked goals or lack of options in their lives, conflict might arise in certain situations.

Powell advised students to document and report any situation that causes them to feel threatened or unsafe.

Daniels said they will hold a second de-escalation training for students at 5:30 p.m. April 2 in Butch’s Den in the CUB, Room L60.