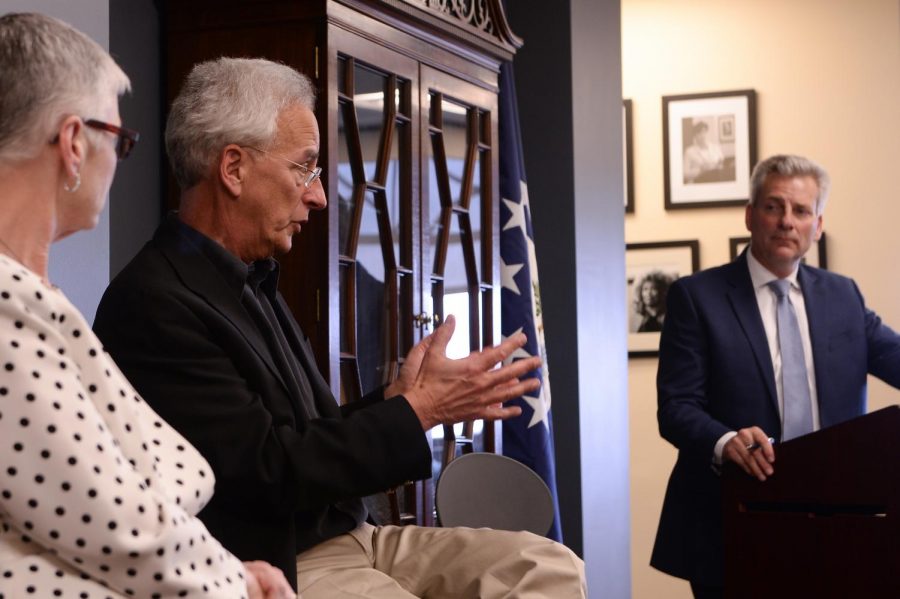 With WSU’s multimillion dollar athletic deficit, WSU Athletics Director Pat Chun said at a talk Thursday that although the university is working to reduce its deficit, money spent on athletics goes to benefit the whole university and not just athletics directly.

“The goal is always to complement what’s going on in the classroom,” he said. “What athletics does provide is an intensive opportunity for young people to improve.”

Chun spoke on a panel hosted by The Foley Institute to talk about university spending in college athletics.

He said that although the university is facing a significant athletic deficit, the problem is “a revenue issue,” not a spending one.

Towns like Pullman may struggle to bring in revenue just by virtue of size and location, said co-panelist Andrew Zimbalist, chair of the department of economics at Smith College.

But the university’s athletic deficit goes beyond the need to generate more revenue through donations or ad sales, Zimbalist said.

“This is a systemic problem,” he said. “It’s not a lack of frugality.”

“In that last report, [the NCAA] said there were 24 schools out of those 129 that were not operating at a deficit,” Zimbalist said.

Those numbers are likely worse for many schools, he said, because facility costs and indirect costs are not accounted for.

Chun said athletics is working on a five-year plan to increase revenue without increasing the university’s debt.

“We have a plan that doesn’t take one iota away from our path to solvency,” he said.

But expecting solvency within five years “might be too rosy,” Zimbalist said.

One of the reasons colleges struggle is because of lower-than-expected returns from the Pac-12, he said.

In addition, many universities, Zimbalist said, buy into the belief that increasing spending in athletics will automatically result in benefits to the academic side of universities. But that’s not always the case.

He pointed to the so-called “Flutie effect,” named for the football star Doug Flutie, who made a game-winning Hail Mary pass during a 1984 game against the University of Miami. That pass was credited with a jump in applicants at Boston College, where Flutie played.

“That 14 percent was on the trend line that Boston College had been experiencing,” he said.

Studies looking for correlations between athletic success and academic success found that although strong athletic programs might somewhat increase application numbers, there was no evidence the extra applications increased the selectivity of college admissions offices, he said.

Put plainly, the quality of the applications drawn in by good athletics programs were not necessarily competitive enough to improve the overall academic performance of the student body.

Similarly, Zimbalist said, there is little evidence to suggest that strong athletics programs led to more donations for university programs as a whole.

Some studies showed a link between funding from state legislatures and university athletic performance, but Zimbalist called it tenuous.

“If the athletics department is running a deficit of $8 million, that’s $8 million that could be spent elsewhere,” he said. “I’m not saying that athletics isn’t worth 8 million. It contributes to the culture. But you need to think hard about where you put that money.”

Chun said the alumni he had talked to expressed a strong devotion to supporting WSU athletics.

“I don’t think there is anything more important to Washington State and to our alums than being part of the Pac-12 conference,” he said. “Cougs take an immense amount of pride in our athletics program.”

Even if the university or WSU President Kirk Schulz were to decide to spend less on athletics in favor of more direct funding for academic endeavors, Zimbalist said it would be a difficult change.