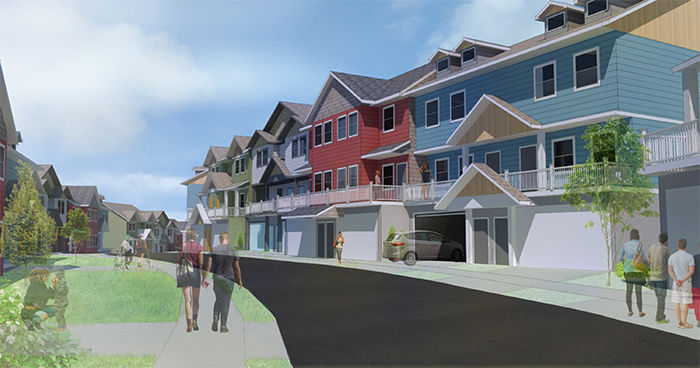 The mixed-use development will include cottage-styled housing plans.

Negotiations regarding the possible development of 20 acres of WSU land have moved forward, and Corporate Pointe Developers have their next presentation to the Board of Regents later this season.

The WSU turf research farm and a Pullman Transit bus transfer station are located on the land, which is near the Palouse Ridge Golf Club. Brelsford said both facilities will be relocated soon.

“We’ve been looking at a couple options for the turf farm,” Brelsford said, “and we’ve spoken to the city about the transfer station moving.”

Brelsford said they are close to completing the memorandum of understanding for the project, which outlines the details of the lease. The next step is to present their proposal to the Board of Regents.

Getting the board’s blessing means moving forward into the design for the project, he said.

“While we’re in design,” Brelsford said, “we’ll pursue the first building of condos, then we’ll go into design for the commercial space.”

Corporate Pointe Developers have not secured any tenants’ businesses to fill the space yet, though there has been interest. In what could be 35,000 square-feet of space zoned for commercial use, he said the surrounding area has an estimated 13,000 students in need of retail amenities.

“We’re looking for a smaller version of a grocery store,” Brelsford said, “the typical things in a neighborhood retail center.”

The commercial space could possibly include a coffee shop, a hair salon and food service options, he said.

Brelsford said WSU has sold land to and bought land from Corporate Pointe Developers in the past. The Hill Top Stables was a past project built by the company on land bought from the university, he said.