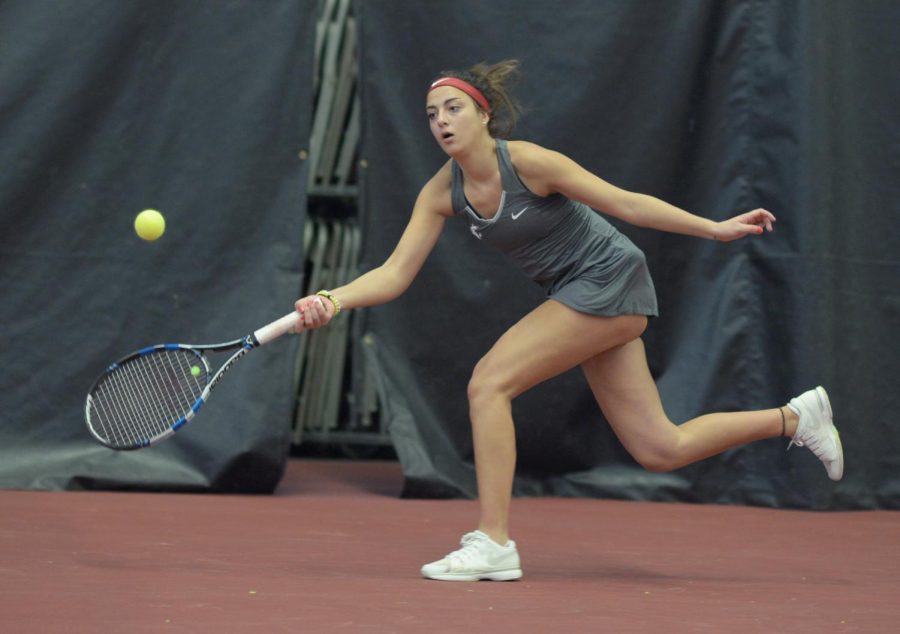 Then-junior Tiffany Mylonas goes for the ball during a match against Eastern Washington on Feb. 24, 2018 at Hollingbery Fieldhouse.

No. 35 WSU tennis was swept by No. 50 Arizona State on Friday in Hollingbery Fieldhouse. This defeat ended the Cougars three-match winning streak.

Head Coach Lisa Hart said her team was disappointed after falling to the Sun Devils (10-8, 3-4) for their first home loss of the season.

“We’re kind of in a critical spot of our season,” Hart said. “We need wins, we can’t really dwell too much on it. We have to take a few things and learn from it.”

Doubles play opened the match between the two teams and the Cougars jumped ahead early as junior Melisa Ates and freshman Yang Lee won their match 6-2.

The doubles point came down to the match featuring senior Aneta Miksovska and freshman Savanna Ly-Nguyen. Despite holding a 5-3 lead in the match and a 3-0 advantage in the tiebreaker, the pair fell to the Sun Devils to give them a 1-0 lead.

The Cougars rolled into singles play looking to fight back but they struggled in the first sets of their matches. Ly-Nguyen narrowly lost 7-6, Mylonas fell 6-2 and Sato dropped 6-2.

Ly-Nguyen and Mylonas were unable to battle back in the second sets of their matches and both lost in straight sets to give ASU a commanding 3-0 lead.

Sato was able to win the second set of her match to force a third but ultimately she fell to complete the 4-0 sweep for the Sun Devils.

WSU will look to bounce back and complete its season-long four-match homestand 10 a.m. Sunday against Arizona at the WSU Outdoor Tennis Courts.

“We kind of have to put this behind us and get ready for Arizona because that’s a match we can definitely win,” Hart said. “We need to be ready to play.”