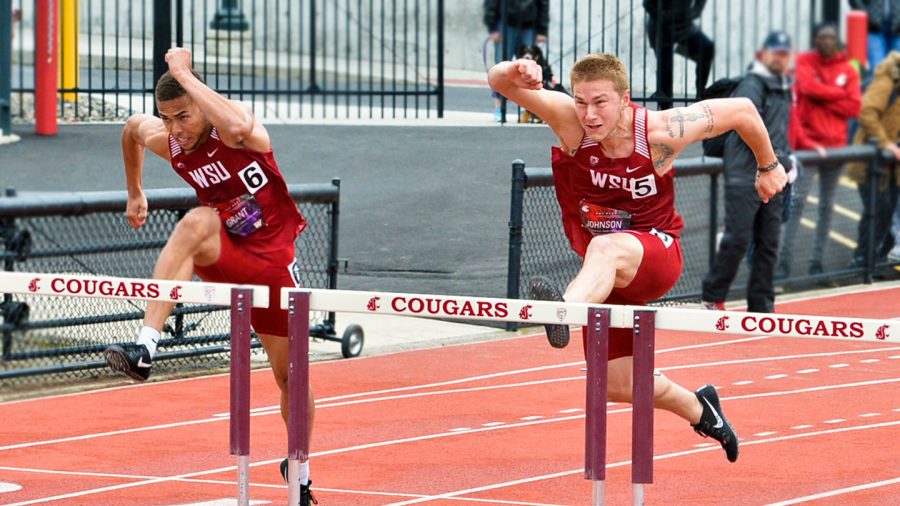 Then-junior Christapherson Grant, left, and then-sophomore Nick Johnson prepare to jump over hurdles during the WSU-UW Dual meet on April 28, 2018 at Mooberry Track.

WSU track and field competed in a trio of track meets this weekend in California and maintained its strong start to the outdoor season.

At the UCLA Legends Invitational in Los Angeles, the Cougars recorded a total of 22 top-five finishes and six event victories.

Freshman Charisma Taylor led the way for the women’s side in the meet, grabbing a victory in the triple jump with a leap of 12.72 meters.  Taylor also set a personal record in the 100-meter hurdles to earn a fourth-place finish.

Freshman Mackenzie Fletcher brought home the other event win for the women’s side as she raced to a first-place finish in the 400-meter hurdles with a time of 1:00.89. Sophomore Jelena Grujic set a personal record in the event to take third.

The men’s side claimed four event victories at the meet with redshirt senior Brock Eager leading the way. He secured a winning mark of 70.85 meters in the hammer throw, the third-best in program history and in the nation currently. Redshirt senior Amani Brown finished third in the event with a toss of 62.75 meters.

Junior Emmanuel Wells Jr. brought the speed he had during the indoor season outdoors to the track in California to claim the men’s 100-meter dash with a time of 10.50 seconds.

Wells was also a part of the men’s 4×100-meter relay that took first with a time of 40.21. Seniors Ja’Maun Charles and Ethan Gardner and sophomore Jake Ulrich were on the relay team as well.

Other notable results on the men’s side in this meet included senior Peyton Fredrickson leaping to a second-place finish in the high jump, senior Robby Flores taking runner-up in the triple jump and redshirt sophomore Alex Cielo setting a personal record in the javelin to grab third.

The Cougars also split their distance runners to compete in the Mike Fanelli Track Classic in Hayward, California, and the Stanford Invitational.

At the Mike Fanelli Track Classic, Cougars set nine personal records but had no top-five finishes.

WSU will battle its bitter rival in the WSU-UW Dual on Saturday at the Husky Track in Seattle.