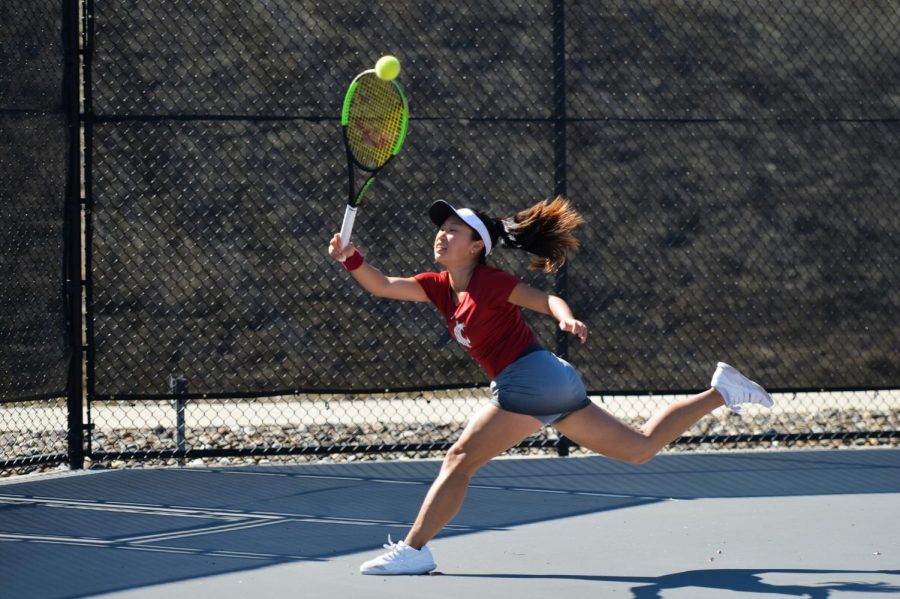 Freshman Savanna Ly-Nguyen reaches out to return the ball during her singles match against Arizona on Sunday at the WSU Outdoor Tennis Courts. The contest resulted in a 6-1 win for the Cougars.

No. 35 Cougar tennis took down Arizona 6-1 when they competed outdoors at home for the first time this season on Sunday.

A refreshing outdoor match brought new energy to the Cougars as they got off to a fast start in doubles play.

Senior Tiffany Mylonas and freshman Hikaru Sato secured their match 6-2 and freshman Yang Lee and junior Melisa Ates clinched the opening doubles point with a 6-4 victory to give WSU a 1-0 lead.

“I like our doubles,” Head Coach Lisa Hart said. “I think we’re starting to play better and better every match.”

Singles play followed and each set became heated as the Wildcats had a tendency to argue for points.

Lee first claimed her match 6-3, 6-4 and increased the Cougars lead to 2-0. Lee said she was struggling throughout the match but kept battling for her teammates.

“I knew I didn’t feel good so I just tried to fight a lot and make the girls know that even when I play bad … I still can come back,” Lee said.

Sophomore Michaela Bayerlova, the No. 51 ranked singles player, grabbed a 6-4 first set win in her match before losing the first two games of the second set. She would rebound though and win six straight games to secure the straight set victory.

Freshman Hikaru Sato would secure the match-clinching point for the Cougars with a 6-1, 4-6, 6-2 victory. She received a row of high-fives after putting the Cougars up 4-0.

Freshman Savanna Ly-Nguyen battled back in her match after losing the first set to claim a 6-7, 6-4, 11-9 victory and give WSU a commanding 5-0 lead.

Hart said her trio of freshmen have impressed her all season.

“I think our freshmen class … handled pressure really well and big moments really well,” Hart said. “I think they continue to get better every match. I’m really happy for them that they were all able to get wins today.”

Mylonas came away with a 7-5, 1-6, 7-5 win in her match and senior Aneta Miksovska battled in the longest match of the day and fell just short in three sets.

Hart said she tried to encourage Mylonas throughout her match to help her fight back from an early deficit.

“[Mylonas] is such a competitor, I think sometimes she can try too hard,” Hart said. “There’s just no quit in her so I just try to keep her calm and relaxed, that’s when she plays her best tennis.”

WSU is now 15-0 this season when they capture the opening doubles point.

The Cougars will hit the road to face Stanford 1:30 p.m. Friday before taking on Cal at noon Saturday.