Athlete of the Week: Brock Eager 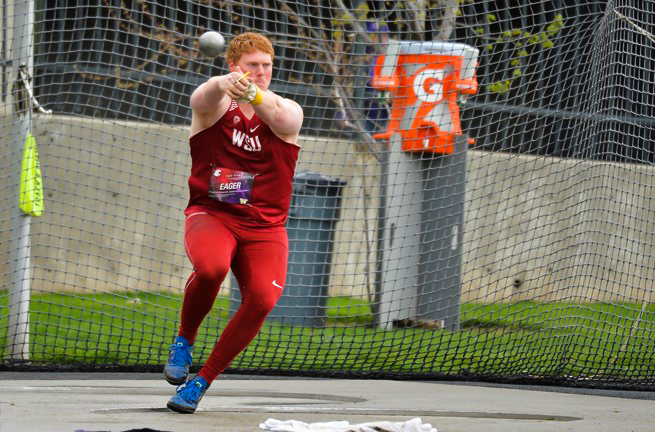 Redshirt senior Brock Eager finishes a turn in the hammer pit. He finished first in the hammer throw at the Mike Fanelli Track Classic last weekend.

Outside of NCAA championship events, the redshirt senior has finished no worse than third in any event since April 23, 2018 when he took fourth in the shot put. Eager started strong this season, finishing first twice and second once in the early outdoor season.

Brock’s WSU career is full of accomplishments. As a redshirt sophomore, he modified the WSU men’s hammer top ten twice, throwing the sixth best and fourth best time in a span of less than a week in 2017. The WSU hammer top ten had not been changed since 1999 before Brock’s two throws in 2017. Brock won the Pac-12 Championships in 2017, finished third in the NCAA West Region and 14th at the NCAA Championships.

Brock’s indoor career is also full of accolades at WSU. As a freshman, Eager finished 13th in the weight toss at the Mountain Pacific Sports Federation Championships. He improved his MPSF Championships result his sophomore year by finishing sixth in the weight toss. He also threw the 35-pound weight a personal best 19.27 meters at the WSU Open, a throw good enough for seventh-best in WSU history.

Eager was an extremely accomplished high school thrower. Brock won the state title in the shot put and the 12-pound hammer his senior year. The win in the hammer improved on a seventh-place finish his sophomore year and a runner-up finish his junior year. He won the USATF Junior Olympics 18U hammer throw in 2014 after finishing as a runner-up the year before. Brock ended his prep career rated second nationally in the 12-pound hammer and first in his age group in the 16-pound hammer.

Brock Eager has dominated throwing sports at WSU for years and is only getting better. Brock’s PR and win in the hammer throw last weekend earned him this week’s Evergreen Athlete of the Week.