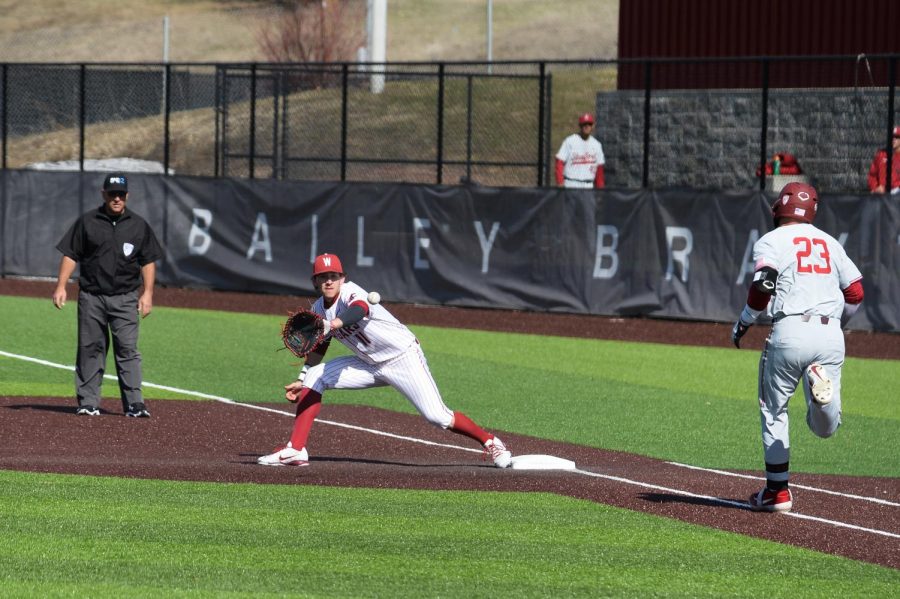 Junior infielder Dillon Plew catches the ball from home plate to force Stanford’s redshirt junior Nickolas Oar out at first in game three of the series against Stanford on Sunday afternoon at Bailey-Brayton Field.

WSU baseball will take on Gonzaga on Tuesday in front of its home crowd at Bailey-Brayton Field.

Stanford had their bats swinging hard all weekend in their sweep over the Cougars, combining for 29 runs in the series including a dominant 14-2 win on Sunday in the series finale.

During the finale, the Cougars seemed to have a strong chance to avoid the sweep and end the losing streak. Sophomore right-handed pitcher Hayden Rosenkrantz had a commanding first inning, striking out the first three batters to retire the side.

The Cougars gave up eight runs in the third inning, in essence losing any chance to secure a win and end their skid.

“Well we haven’t performed very well as of late,” Lees said. “We just need to challenge the kids. There’s more we can take; more we can focus on.”

WSU’s schedule will finally give room to breathe as Gonzaga will be one of many unranked opponents it will face in the upcoming weeks.

The Bulldogs will be a much easier test than No. 2 Stanford, but they still have much higher momentum than the Cougars, as their walk-off home run to win their last game of the series against San Diego will give them energy coming into Pullman.

“We’re going to continue to be as positive as possible,” Lees said. “because even though we haven’t performed as well as people would like, or as well as we would like,  we hold ourselves more accountable than anybody could.”

The Cougars have had a long skid of subpar play recently, with team batting average dropping down to .260 and their ERA rising above six. However, 20 out of their 26 games have been on the road, preventing the team from creating the momentum they need in order to secure a win of any sort.

Despite being in the slump, Lees said his team could perform better moving forward.

“Whatever it is, it’s time for them to challenge themselves,” Lees said, “It’s not about [them] it’s about coming to the field every day and competing a little bit better than we have, that’s going to be the challenge for Tuesday [against Gonzaga].”

With a giant chip on their shoulder and a home crowd waiting for them, the Cougars should be primed and ready to secure their first win in 12 games. First pitch is set for 5:05 p.m. on Tuesday at Bailey-Brayton Field.