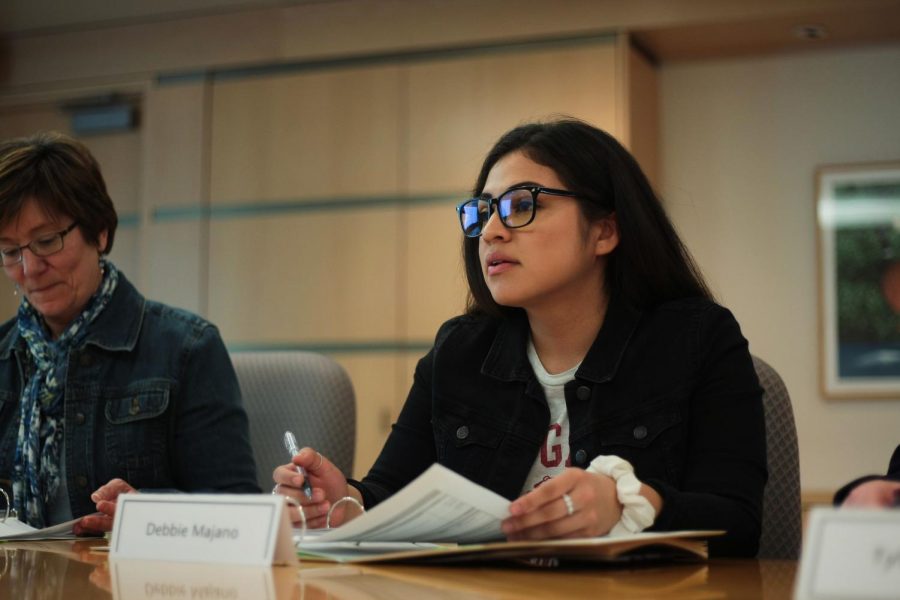 WSU S&A fee committee member Debbie Majano reviews the 2019-2020 WSU service and activities budget at an S&A meeting Monday in Lighty. The committee meets with groups later in the week.

The Service and Activity Fees Committee met Monday to discuss its approach to organizations that have requested funding, which total to about $10.5 million.

The committee viewed a spreadsheet with base requests from S&A groups for 2019-2020.

According to the spreadsheet, the $10.5 million total includes base requests, carry forward funds, one-time requests and funding for facilities. It said approved allocations from April 2019 are about $9.2 million.

WSU Budget and Police Analyst Maggie McFadden said committee members need to make base requests that are equal to or less than the incoming revenue.

The members familiarized themselves with the requests and considered why the organizations would request the number of funds. Members also planned to see what expenditures looked like last year so the committee could use their time more effectively and ask more “why” questions.

The CUB requested the largest amount of funding, which is about $1.8 million. The second largest request is from the UREC, who is asking for $1.6 million. ASWSU asked for a total of about $800,000 to be split between the administration and executives, the senate, and senate programming.

McFadden said committee members should pay attention to estimated carryforward returns, which is the leftover money from previous budgets.

The committee discussed how the athletics department is beginning to make larger one-time requests rather than base requests, and they’re becoming less dependent on S&A fees.

The current S&A fee per student is $537 a year with no rate increase.

The committee’s deliberations and hearings are open to the public and will take place in Lighty Student Services Building 405 at 5 p.m. on Tuesday, Wednesday and Thursday.

The caption has been updated to reflect the correct name of the subject in the photo.