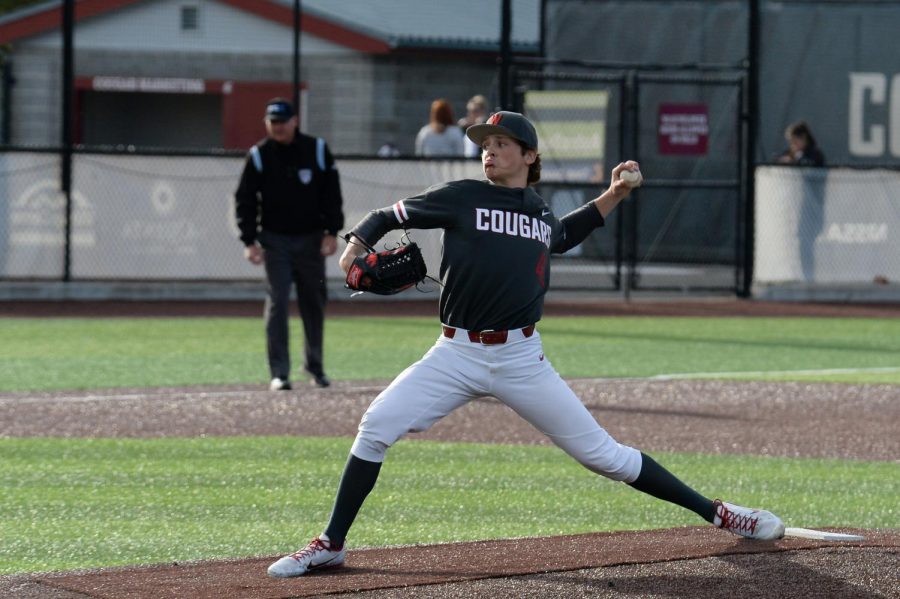 Freshman left-handed pitcher Tyson Guerrero made his second start of the season and had a dominant first inning. All three hitters he faced grounded out to sophomore second baseman Garrett Gouldsmith.

Freshman infielder Kodie Kolden got things started for the Cougars (7-20) with a lead off bunt followed by a two-run home run from senior shortstop Andres Alvarez to give WSU an early 2-0 lead.

Guerrero’s solid pitching in the first carried over in the second as the Zags (12-13) went down one, two, three again behind a strong defense.

In the bottom half of the second, Kolden smashed a three-run home run with two outs to push the Cougars lead to 5-0.

“I just saw a pitch I could handle and it paid off,” Kolden said. “It was a good feeling to get out on a hot start.”

Though Guerrero is normally a mid-game reliever, he looked unhittable as he knocked out three quick innings with ease as the Cougs still led 5-0.

Gonzaga redshirt junior left-handed pitcher Matthew Henckel completed his first scoreless inning of the game in the third after struggling early on.

The Bulldogs knocked in their first run of the evening in the fourth to narrow the lead to 5-1.

Guerrero would be replaced by freshman right-handed pitcher Zane Mills after 3 2/3 innings of work and just 47 pitches.

Head Coach Marty Lees said he loved Guerrero’s performance and hopes to see it in the next series as well.

“I really thought Tyson came out and set the tone for us,” Lees said. “I thought he gave us a really great start.”

Alvarez’s hot day at the plate continued as he lined a shot up the middle to score a run. Then senior catcher Rob Teel hit a ball to deep left center field to give the Cougars an 8-1 lead.

Through five innings, WSU was dominating both on offense and defense.

Junior outfielder Danny Sinatro reached base with his second walk of the night in the sixth and Teel would bring him in to increase the lead to 9-1.

The Zags rallied back with a huge inning in the seventh as they loaded the bases with nobody out and scored six runs off of five straight hits and two errors to pull within two runs.

Fortunately, WSU answered right back in the next half inning as Kolden and Sinatro brought in a combined three runs to give WSU a comfortable 12-7 lead.

The Bulldogs rallied yet again in the eighth for a couple of runs and they also launched a solo home run in the ninth to pull within two again but couldn’t quite complete the rally.

Kolden said the momentum from this victory will carry over into their three-game road series with Cal this weekend.

“I think this will really help us against Cal,” Kolden said. “When we get that hot on offense, good things happen.”

The Cougars head to Berkeley for a three-game series against Cal starting 7:05 p.m. Friday at Evans Diamond. The game can also be seen live on Pac-12 Networks.