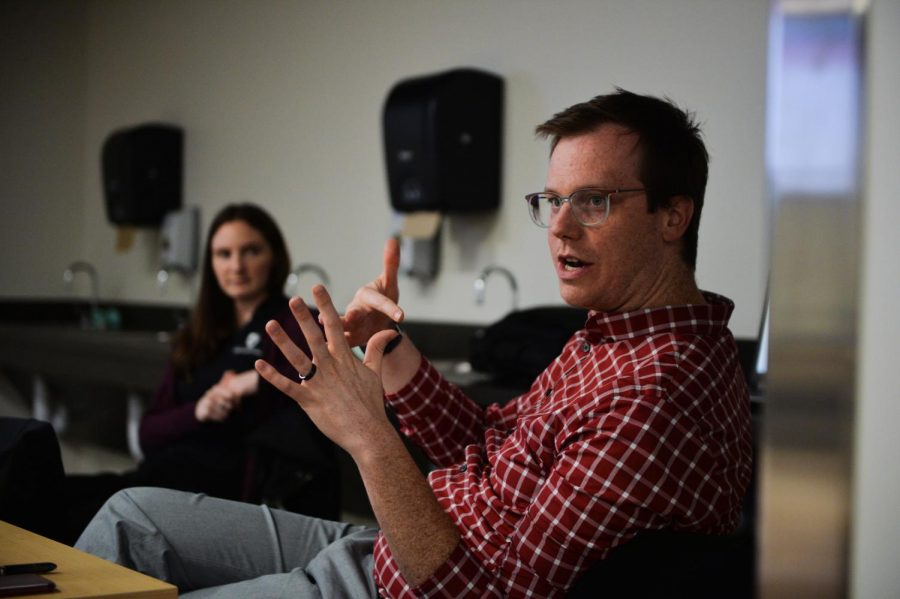 GIESORC Director Matthew Jeffries led a training session for allies of the LGBTQ community Wednesday afternoon in the Chinook Student Center. Jeffries says there are resources on campus for marginalized groups, like a growing number of gender-neutral bathrooms and an open space for students.

A workshop Wednesday showed WSU students and staff ways to be an ally to people in the LGBTQ community.

Matthew Jeffries, director of Gender Identity/ Expression and Sexual Orientation Resource Center (GIESORC), and a representative from Cougar Health Services hosted a workshop to speak about being an ally.

The presenters said an ally is someone who fights for a marginalized community they aren’t personally part of.

“We need to learn how to interact with folks that are different from us,” Jeffries said.

Participants watched a video that outlined ways to support the LGBTQ community. According to the video, supporters should understand their privilege, speak up not over others and learn from mistakes.

Jeffries told participants about terms and pronouns that are common in the LGBTQ community and different types of privilege.

The presenters said cisgender privilege means an individual who identifies with the gender they were assigned at birth has more advantages than someone who is not cisgender.

This privilege allows cisgender people to use public restrooms without fear or anxiety, the presenters said. They are also less likely to face resistance with pronouns or their chosen name.

Jeffries said that though there are gender-inclusive bathrooms on WSU’s campus, there are still places where there are gaps. These leave an obstacle for students.

Jeffries said a part of being an ally is doing homework about LGBTQ topics, asking questions and being involved in the LGBTQ community. He said people can do this by following queer media like “Huffington Post Queer” and attending GIESORC events.

Jeffries said WSU is a space for people to learn more and do more in the LGBTQ community.

“Folks at WSU really want to do better, so they ask questions to figure out how we can make more thoughtful and affirming policies and spaces for students,” he said. “We’re a thoughtful place.”

WSU is ranked among the top-30 universities and colleges that are LGBTQ-friendly, according to Campus Pride, a nonprofit organization for LGBTQ students. The evaluations are determined by the school’s policies, programs and practices.

Ally training is offered once every month and also upon request through WSU Human Resource Services.