Governor uses examples from across country to show climate change 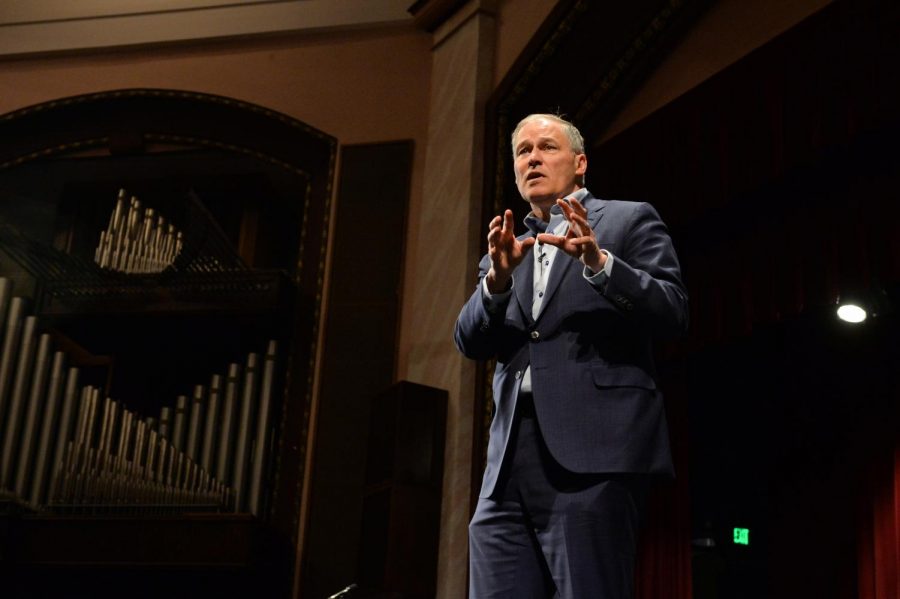 Gov. Jay Inslee highlights Washington's role in the movement for cleaner energy policies during a speech and a Q&A session Wednesday morning in Bryan Hall.

The Foley Institute hosted Gov. Jay Inslee, who spoke about what he believes is a necessary and economically beneficial transition to clean energy.

Inslee said he has visited communities in the last few months that have experienced consequences of climate change firsthand.

He mentioned Paradise, California, a community ravaged by wildfires as a result of increasingly long and intense wildfire seasons, and also talked about roadways in Miami that had to be permanently raised because of frequent flooding.

He said we are seeing the beginning cusp of life-altering consequences of carbon dioxide pollution.

He said while this is a moment of urgent peril, it is also a moment of economic promise through a transformative clean energy economy.

“We are beginning the transformation of the economy to one that is basically carbon-free over the next several decades,” Inslee said.

He said Washington is already going through this transformation, with an increasing reliance on clean energy. Inslee pointed out the many wind-turbine installations across the state as well as the state’s largest solar farm in Lind, Washington.

Inslee said the idea that clean energy only benefits urban elites is a complete misconception.

“This is an economic driver for all of our communities, urban and rural,” he said.

Inslee used the city of Moses Lake, Washington, as an example of a rural community that will benefit from increased solar energy use. He said Moses Lake is one of the nation’s largest manufacturers of polysilicates for solar panels.

Inslee said when homeowners retrofit their houses to be more energy- and resource-efficient, it will be the plumbers, electricians, carpenters and tradesmen who benefit from the opportunities.

He said solar panel installers and wind turbine technicians are some of the largest growing jobs in America as the nation begins to make the transition to clean energy.

Inslee said we need a “just” transition to carbon-free energy.

He explained what can be done to help aid communities that currently depend on less clean types of energy, like coal, by using the example of the Centralia, Washington.

Inslee said the state decided to move away from coal energy, and jobs were lost at the town’s coal energy facility. A small business development fund was created and their infrastructure was upgraded to help support the local economy.

He said while the transition away from coal and oil will not be instantaneous, he felt strategies like the ones used in Centralia could be effective ways to bolster communities as they make these changes.

Inslee said we are at a political tipping point when it comes to taking action to mitigate climate change. He said people are no longer seeing climate change as data on a graph, now they are seeing the real-life consequences.

He said the cost of damage that will be caused by the flooding, fires, storms and disasters far outweigh the cost of transitioning to clean energy.

“The path of inaction is too expensive,” Inslee said.