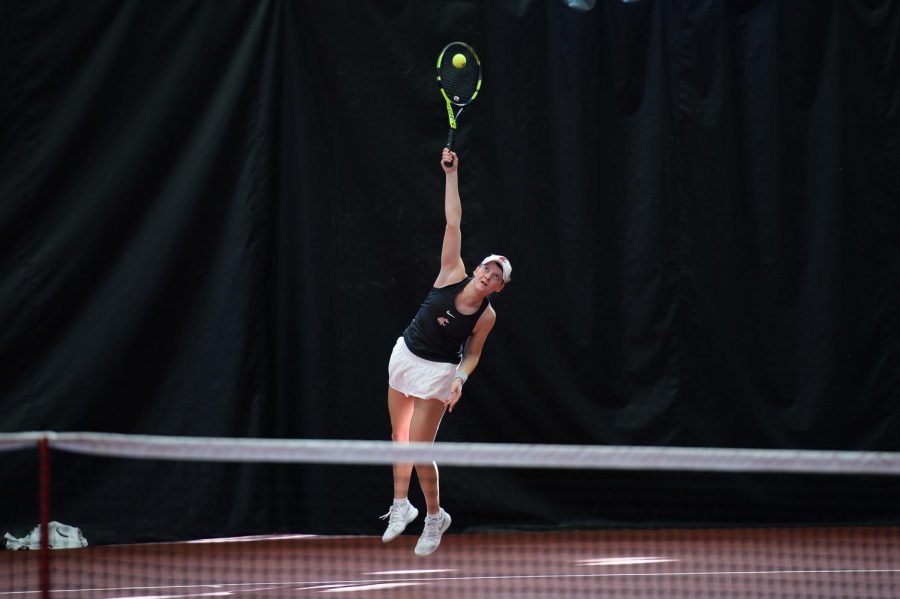 Sophomore Michaela Bayerlova serves the ball during her match against Boise State on March 24 at Hollingbery Fieldhouse.

The No. 36 WSU tennis team is leaving Pullman to travel to Stanford, California, after its 6-1 win against Arizona at the outdoor courts.

Awaiting them are the No. 5 ranked Cardinal, currently on a nine-game winning streak. These teams played back in January, and the Cardinal beat the Cougs 4-0, serving them their first loss of the season.

Freshman player Hikaru Sato said she has confidence in her team playing Stanford as they performed well in the first contest between the two.

“We have to get the doubles point first,” Sato said. “I think we have a good possibility of winning.”

Assistant Coach Trang Huynh said their match against the Cardinal didn’t have lasting impacts on the team and the best thing they can do is win those close sets in their next matchup.

“I think most of the time when the [women] are playing against them we always encourage them to play their best tennis,” Huynh said. “They just really enjoy playing and competing so we just got to go out there and try really hard and see how it goes.”

The Cougars will face another ranked Pac-12 team the following day when they travel to Berkeley, California, where they will compete against the No. 19-ranked Golden Bears.

However, Huynh isn’t worried about playing another ranked conference team and is confident in her players’ abilities to recover.

“Our team is quite fit … we are all pretty deep in the season right now,” Huynh said. “Sometimes some of them may be a little tired, but everybody really wants to win and everyone wants to make the tournament so we’re all prepared and ready.”

The Golden Bears most recent ranked win was against Arizona State, who beat the Cougars 4-0 in their most recent trip to the Palouse.

The last time the Cougars faced the Golden Bears was last season when they took the 4-3 advantage. Huynh said she thinks the team will have great energy for these road matches.

“We did beat Cal last year. I think that brings good confidence to the girls to believe in themselves,” Huynh said. “We also played close matches and the doubles point against Stanford at the beginning of this year, so I think they have great confidence and will go out there with great energy and get the job done.”

The Cougars will face the Cardinal at 1:30 p.m. on Saturday in Stanford, California. Then they will take on the Golden Bears at noon on Sunday in Berkeley, California.