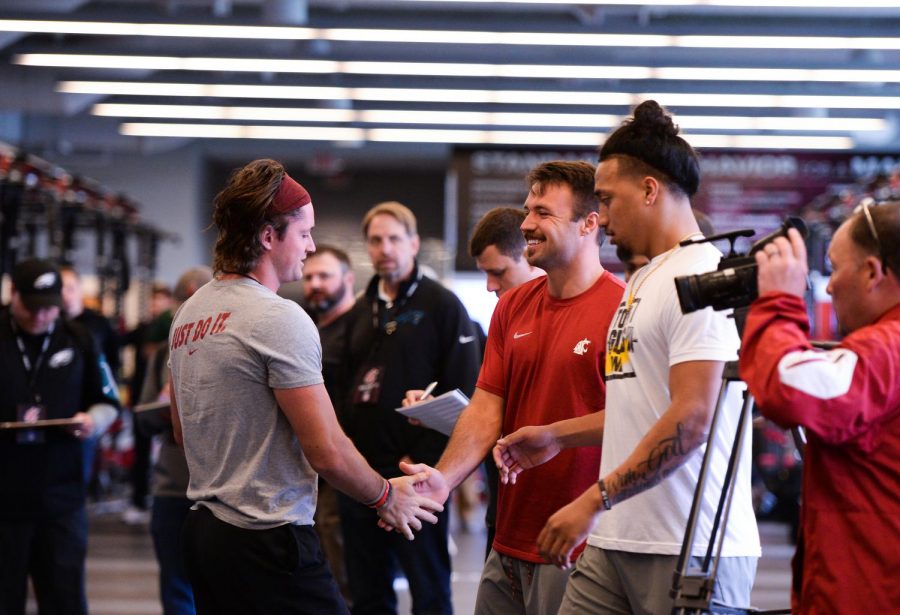 NFL scouts and national media flocked to Pullman on Wednesday to watch 14 former football players take part in WSU’s Pro Day and see if they have what it takes to play at the next level.

The main attraction was offensive lineman Andre Dillard, who is projected to be a first-round pick in the 2019 NFL Draft, which starts on April 25.

The NFL scouts in attendance paid close attention whenever Dillard was on the field and Carolina Panthers General Manager Marty Hurney flew all the way to Pullman just to watch him.

“I was honored for him to be with us,” Dillard said about Hurney coming to WSU to meet with him. “It felt good to put on a bit of a show.”

The players started the day in the weight room in the Cougar Football Complex with the bench press, broad jump and vertical jump.

Minshew and Dillard, two of the three Cougars that participated in the NFL Scouting Combine in early March, decided that they didn’t need to improve on their results from the combine, so they did not partake in the weight room portion of the day.

The most impressive Coug in the weight room was Pelluer, who cranked out 24 reps of 225 pounds on the bench press.

The players and the scouts then moved to the Indoor Practice Facility so the athletes could perform their drills without having to worry about slipping on the slick grass from the rainfall.

The former Cougs started with the 40-yard dash, a key metric that scouts focus on as they evaluate a player’s talent. However, the official times are not made public during the Pro Day event.

The players then transitioned into position-specific drills, with Dillard up first.

Despite all the attention on him, Dillard said he stayed focused and performed well.

“My portion was pretty quick, but I had fun doing it and it felt good so I was glad to be out here,” Dillard said. “This has become a little bit normal, football is my comfort zone so there’s no need to be nervous anymore.”

Following Dillard was the trio of running backs, highlighted by Williams, who was looking to improve off a strong showing at the combine. Williams, who had one season of eligibility left at WSU, feels good about his decision to enter the draft early.

“I was happy with how today went … there was a lot of adversity, I went from being homeless to tearing my ACL,” Williams said. “I always say, adversity is going to hit you, and it’s going to hit you hard. Fight through every single thing, embrace everything you go through, and everything will be fine.”

Minshew and the wide receivers took to the field after the running backs. Minshew seemed to have a solid day throwing the ball as he looked to leave an impression on scouts for the last time in front of them before the draft.

“Definitely could be better, but I always feel like that no matter what we do, but all in all it was a good day,” Minshew said. “It’s been a crazy process, but you learn so much, I get to be around so many different people with so many different views, but I think it’s really prepared me well for what I’m going through now.”

The players will now wait until the 2019 NFL Draft at the end of April to see if their dreams of playing professionally come true.