‘His true calling is in a university’ 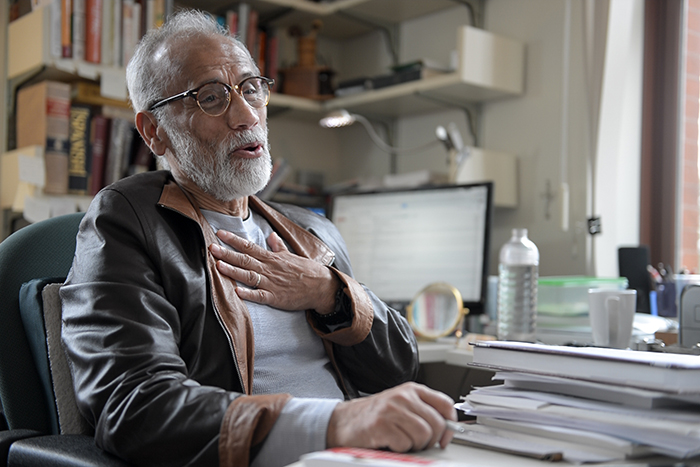 Professor Francisco Manzo-Robledo talks about his academic journey as an immigrant from Mexico.

He was born on the roof of a university in Guadalajara, Mexico, and has dedicated his life to intellectual pursuits.

Francisco Manzo-Robledo was the youngest student in his high school class, where he found himself tutoring his peers in math. He realized teaching was his passion.

Manzo-Robledo said that looking back, high school was his hardest degree. He took classes until 11 p.m., while working two jobs during the day to support himself.

At 17, while working as a janitor, he realized this was not the type of life he wanted to lead.

Forty-seven years ago, he earned a scholarship to study English and engineering at the University of Texas.

Officers interrogated him at the border. He had documents to prove his scholarship, but they still subjected him to a strip search.

“I didn’t know how to speak English,” he said. “I was 20 years old so I just went along with it, but I felt humiliated.”

He then travelled around Latin America to research literature. He took this passion and let it flow into his writing, becoming a published author.

In 1989 Manzo-Robledo became a professor at WSU, using his knowledge of Latin literature to educate students. He has spent a large part of his life in Pullman, where two of his children were born.

One day while Manzo-Robledo was jogging outdoors, someone yelled, “Go back to your country!” at him. Throughout his lifetime, he has sensed that he has been treated differently because of his skin color.

Today, he realizes that his true calling is in a university. It is where he belongs.

“I couldn’t thrive anywhere else,” he said. “The more I learn, the more I realize there’s so much left to learn.”