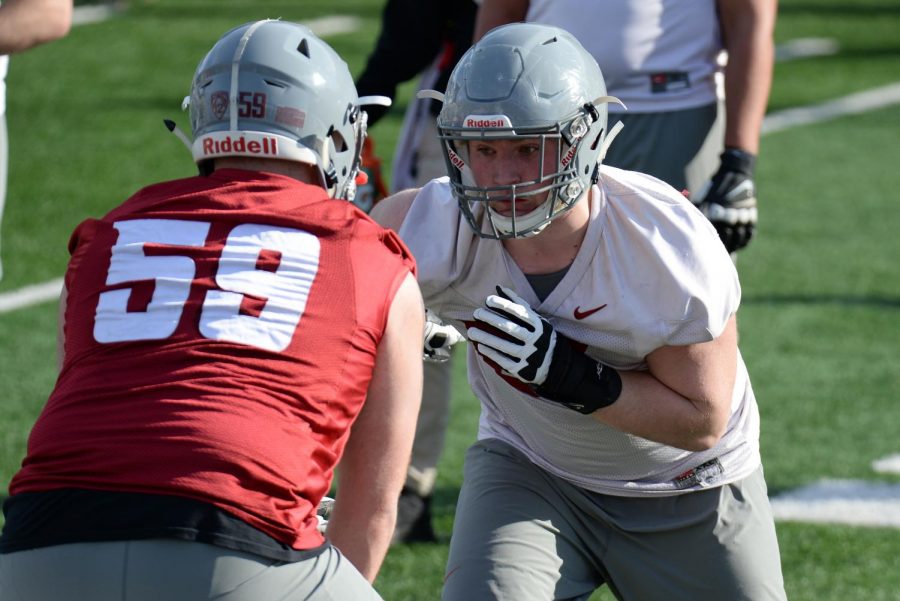 If Cougar football has a successful 2019 season, it will be due in large part to the immense depth at the wide receiver position.

This was on full display at Martin Stadium on Thursday afternoon as the Cougs held their seventh practice of the spring.

WSU’s arsenal at wide receiver lost only one weapon in the offseason, Kyle Sweet, so whoever gets the starting quarterback spot will be able to throw the ball to a boatload of talent.

“It’s nice, we spend a lot of time talking about the details of how much better they can get, versus talking about basic stuff which is what you do with new guys,” outside wide receivers coach Steve Spurrier Jr. said. “These guys are all well versed, when we meet they know all the plays … they’ve just got to strive to play fast and come down with the ball.”

The talent was on fall display on a cloudy, rainy afternoon in Pullman.

“We’ve been awesome,” redshirt senior wide receiver Brandon Arconado said. “Whether it is the inside guys or outside guys, everybody is trying to bring the juice every day. I mean it’s a new practice and a new play every play, so we’ve been having fun.”

Arconado is looking to step up this season and he is taking full advantage of his opportunity, catching a 40-yard touchdown pass from redshirt senior quarterback Anthony Gordon on Thursday.

Another returning star for the Cougar offense is senior wide receiver Dezmon Patmon, who reeled in a 35-yard touchdown pass from redshirt senior quarterback Trey Tinsley.

“He’s making strides, but he still has got room to grow,” Spurrier said about Patmon. “If I can get him to play as good as he looks he’s really going to be special, I can promise you that.”

However, the defense for the Cougars does not make it easy for the offense. They made sure to challenge the offense, making some big plays on Thursday afternoon.

It was an exciting day of practice on both sides of the ball and the Cougars will look to match that energy on Saturday afternoon when they return to the field for their next practice.