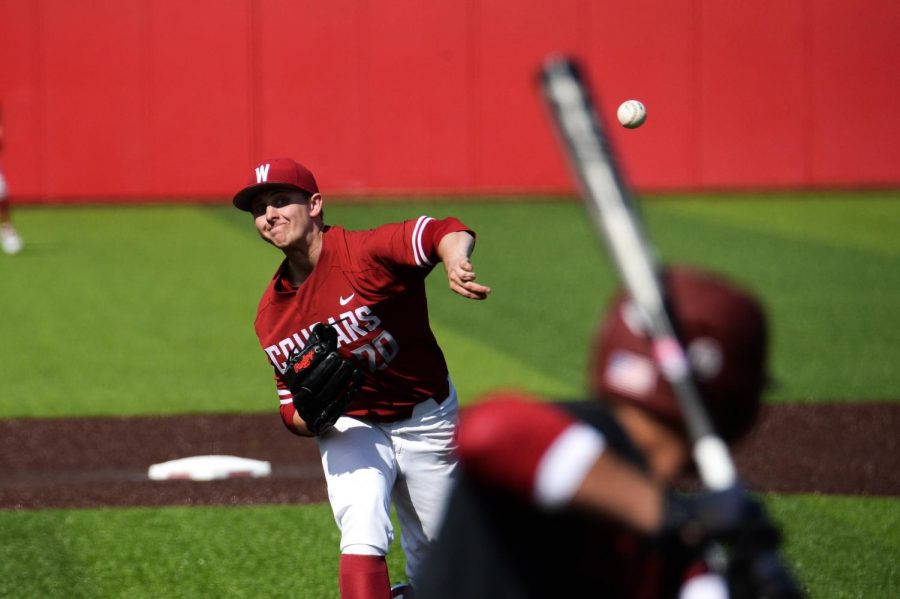 Then-junior left-handed pitcher AJ Block throws a pitch during the game against Stanford on March 30 at Bailey-Brayton Field.

WSU baseball struggled on offense for a second straight game as they fell to Cal 6-1 on Saturday night in Berkeley.

The Cougars (7-22, 0-8) started off the day swinging their bats as they took a 1-0 lead in the top of the first inning when junior infielder Dillion Plew hammered a solo home run to right field.

Junior left handed pitcher AJ Block earned his seventh start of the season and was searching for his first win.

The Golden Bears started junior right-handed pitcher Jared Horn, who was nothing short of dominant, pitching eight innings and only giving up one run and six hits.

The Cal defense looked a bit shaky in the top of the third inning as they had some issues fielding the ball allowing a Cougar runner to get on base due to an error. However, solid pitching from Horn kept WSU from scoring.

The Golden Bears responded in the bottom of the third inning when sophomore infielder Quentin Selma belted a solo home run over the fence in left field to tie the game at 1-1.

Cal was not done scoring in the third inning. A single to center field brought in another run to give the Golden Bears a 2-1 advantage.

In the bottom of the fifth, Cal hit a two-run home run and solo home run to increase its lead to 5-1.

The Golden Bears continued to slug their way through the game hitting another home run in the bottom of the sixth to make it 6-1 Cal.

The Cougars attempted to spark a rally in the top of the eighth inning when they had multiple batters reach base and get into scoring position. But Horn put an end to it by retiring the side.

The Cougars will look to avoid the series sweep 1:05 p.m Sunday at Evans Diamond. The game can also be seen live on Pac-12 Networks.