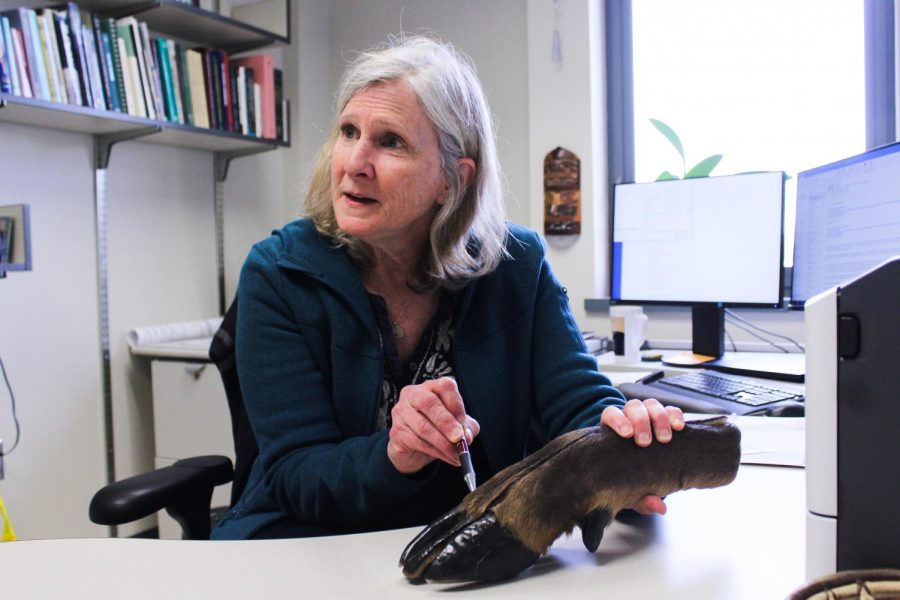 Margaret Wild, professor of the Department of Veterinary Microbiology and Pathology at the WSU College of Veterinary Medicine, uses a mummified elk hoof to explain Elk Hoof disease on Friday afternoon in Bustad Hall.

Across the state, elk are limping from elk hoof disease. Many of them even die from it. WSU researchers are now trying to determine the cause.

Margaret Wild, professor in the Department of Veterinary Microbiology and Pathology, said elk feet acquire sores from this disease. These lesions end up spreading to the tissue underneath the hoof and kill that tissue.

Eventually, the hoof separates from the tissue and even sloughs off because of this separation, Wild said.

When this occurs, the elk is walking on its bone; there is a small amount of tissue between the hoof and bone, but it wears down to the bone easily, she said.

“It’s just kind of bloody and raw-looking,” Wild said. “It kind of looks like road rash.”

This condition is painful and causes elk to lag behind the herd and to have issues finding food. Many elk with this condition die prematurely, she said.

The WSU research team will be looking at pathogens in the lab and observing captive elk to see the disease progress, she said.

“By having captive elk, we’ll be able to follow that disease through time versus [you] go out in the wild, and you only get one snapshot in time, and you can’t understand the whole process that’s going on,” Wild said.

A new humane, biosecure facility will be constructed at WSU to house the elk. Construction will hopefully start within the next month, she said.

Bob Mealey, chair of the Department of Veterinary Microbiology and Pathology, said the facility is more expensive than they originally thought. The money for the facility will partially come from the legislature’s funding and partly from the WSU College of Veterinary Medicine.

Charlie Powell, public information officer for the college of veterinary medicine, said the new building will be near the compost facility.

Wild said the facility will house healthy elk from either the wild or a zoo-type facility. In order to further know what is causing the disease including any contributing factors, the research team will infect the healthy elk with the Treponeme bacteria.

“We’ll be doing everything we can to relieve the pain and suffering of the elk,” Wild said. “Studying the disease in captivity is the way we’re going to be the most effective … I have to ensure that the benefit we receive from every one of those elk is worth the cost to the elk.”

Citizens had seen elk that were dying because of the disease and had gone to the legislature for funding so experts could research the issue, Powell said. Both the Washington State House and Senate voted unanimously for the funding, and a unanimous vote is rare.

Because of this issue, the legislature mandated that the college of veterinary medicine research this topic. A mandate like this is atypical, Mealey said.

It took about a year to find someone to lead the project, Mealey said, but Wild has experience with elk and was the most qualified person.

“This program couldn’t be in better hands than with Dr. Wild leading it,” Mealey said. “I think we’ve got a really good opportunity to come up with some solutions to the problem with her in the lead.”

Wild said the disease was first detected in 2008 in southwest Washington. Since that time, the disease has spread throughout Washington and into parts of Oregon and Idaho.

The Washington Department of Fish & Wildlife (WDFW) and some WSU researchers have determined that Treponeme bacteria is part of the problem. They do not know if there are other contributing factors to the disease, such as other pathogens, nutrition, or herbicide or fertilizer exposure, she said.

In certain herds, Wild said, up to 90 percent of individuals acquired the disease, according to the WDFW. However, not all herds have such a high prevalence of the disease.

Wild said the researchers are also looking at the distribution of the disease and whether there are risk factors involved in the locations.

The team has samples of hooves from certain locations in Washington and Oregon for diagnostic work, she said.

Hunters who have killed elk have submitted hooves to WDFW, and WSU is using many of those hooves, Wild said.

They are also looking at the social aspects of the disease, she said, including how concerned people are about it and what actions they would support to manage and address the disease.

“If we do the best biological science, if people don’t support that kind of management or that information we come up with, then it’s really all for naught,” Wild said. “We have to understand it in the social context as well.”