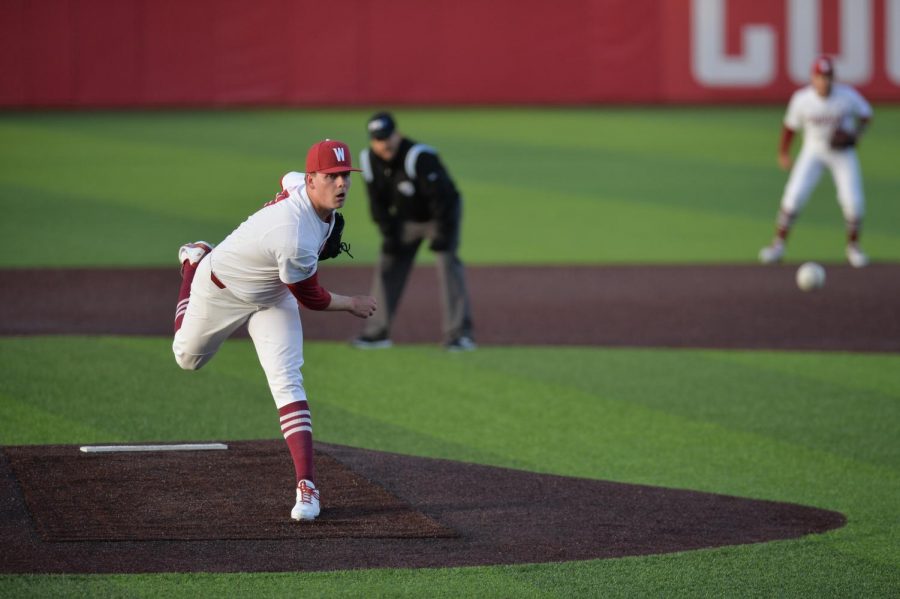 Freshman right-handed pitcher Zane Mills pitches in the fifth inning of the game against Stanford on March 29 at Bailey-Brayton Field.

WSU baseball dropped the season finale against Cal 9-5 on Sunday in Berkeley to increase its conference losing streak to nine games.

Sophomore outfielder Collin Montez got the scoring started in the top of the second inning. His solo home run to right field gave WSU an early 1-0 lead.

Cal sophomore infielder Sam Wezniak erased the Cougars’ lead in the bottom of the inning with a solo home run of his own to tie the game at 1-1.

The Golden Bears weren’t done scoring in the inning thanks to a pair of singles that brought in three runs and made it 4-1 Cal.

However, the Cougars didn’t back down and scored a run in the top of the third off a sacrifice fly from freshman infielder Kyle Manzardo that brought in junior infielder Dillon Plew.

Rosenkrantz was replaced by redshirt junior right-handed pitcher Davis Baillie, who struggled. He threw a wild pitch in the fourth to allow Cal to score a run and gave up a two-run home run in the fifth to help Cal build a 7-2 lead.

Baillie finished the night giving up three hits and runs over two innings of work. He also recorded three strikeouts.

The Golden Bears offense continued to produce scoring one run in the sixth and seventh innings to grab a 9-2 advantage.

The Cougars’ bats started to show some life in the top of the eighth inning. Freshman catcher Anthony Notaro hit an RBI double to left field to bring in Manzardo and make it a 9-3 ballgame.

WSU wasn’t finished as freshman Tyson Guerrero singled to bring in Notaro, and Guerrero reached home off of an error by the Cal shortstop. This brought the score to 9-5.

Guerrero took the mound in the bottom of the eighth for the Cougs. He gave up no hits and recorded two strikeouts to give WSU one last chance in the ninth inning to complete a comeback.

Unfortunately, Cal put the brakes on that plan and held the Cougars scoreless in the final inning to secure a 9-5 win.

The Cougars will turn around quickly and return home to face Seattle University 3:05 p.m. Tuesday at Bailey-Brayton Field.