Local organization to host events this month to promote awareness 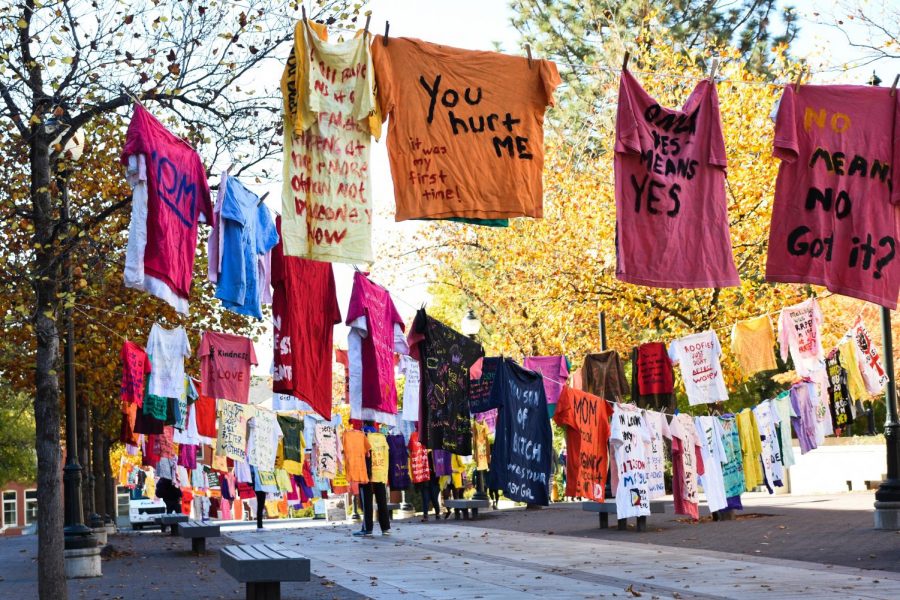 Shirts are hung by the YWCA Coalition for Women Students as a part of its Clothesline Project Oct. 15 2018 on the Glenn Terrell Friendship Mall.

Alternatives to Violence of the Palouse (ATVP) will host events throughout April to promote sexual assault awareness in Pullman and Moscow.

Vanessa Corwin, sexual assault advocate and prevention educator at ATVP, said the first step in promoting sexual assault awareness is being aware that it is an issue in society.

“You see a lot of different statistics out there,” Corwin said. “Bringing awareness and attention to the issue is really important.”

She said Sexual Assault Awareness Month brings the conversation of sexual violence to the forefront.

“It’s really great when we get to bring the community in and get a lot of education work done in the month of April,” she said. “It’s being normalized as a topic of conversation and action.”

Corwin said some events have already occurred, like wearing teal for April 2 for “Day of Action.” On April 3, “Start by Believing Day” aimed to support people who came out as sexual assault survivors.

“We have to shift our culture to support survivors by believing them when they disclose sexual assault,” Corwin said. “Oftentimes, people are hesitant to believe folks that experience this crime. It’s so different the way people react to disclosures of sexual assault than to any other crime committed.”

International Anti-Street Harassment Week will occur from April 7-13, she said. ATVP will be active on social media this week by addressing societal attitudes toward street harassment.

“It’s seen as something so minor, something to brush off, but really that’s part of the behavior that provides that foundation for a larger culture that accepts that sexual assault is normal,” Corwin said. “It perpetuates violence against women and other marginalized folk.”

She said ATVP will begin offering free yoga classes led by a trauma-informed yoga teacher on April 16 at the Gladish Community & Cultural Center. Classes will continue weekly into May, and those who want to participate should contact the ATVP office in Pullman, she said.

Corwin said a book club discussion of Roxane Gay’s “Not That Bad: Dispatches from Rape Culture” will occur on April 17 from 6-7 p.m. at Three Forks Bike and Brew. ATVP will be giving out free copies of the book at its Pullman office, she said.

April 24 is a day of international awareness called “Denim Day,” she said. During this day, people will wear denim in support of sexual assault survivors. More information on the movement can be found here: https://www.denimdayinfo.org/why-denim.

“This started in the 90s because the courts in Italy ruled that it wasn’t possible for a young girl to be raped because her jeans were so tight that she must have helped her rapist remove them,” Corwin said.

Also on April 24, WSU’s Criminal Justice and Criminology Graduate Student Association will have a showing of Jackson Katz’s “The Bystander Moment.” Corwin said the documentary is about speaking out and taking responsibility for the safety of those in the community who are at risk.

She said ATVP hung posters in bathrooms of local bars and pubs featuring ATVP’s contact information, a 24-hour hotline number and other resources.

Corwin said ATVP and the University of Idaho have partnered and are hosting several events this month including “Sex in the Dark,” which consists of talks about consent and healthy relationships.

“What we do year-round is provide support and crisis intervention. Our aim is to prevent sexual violence from happening in the first place,” Corwin said. “This includes changing cultural norms that encourage sexual assault and really giving people the tools to help them think further.”