City officials are working on public projects, with entities including airport 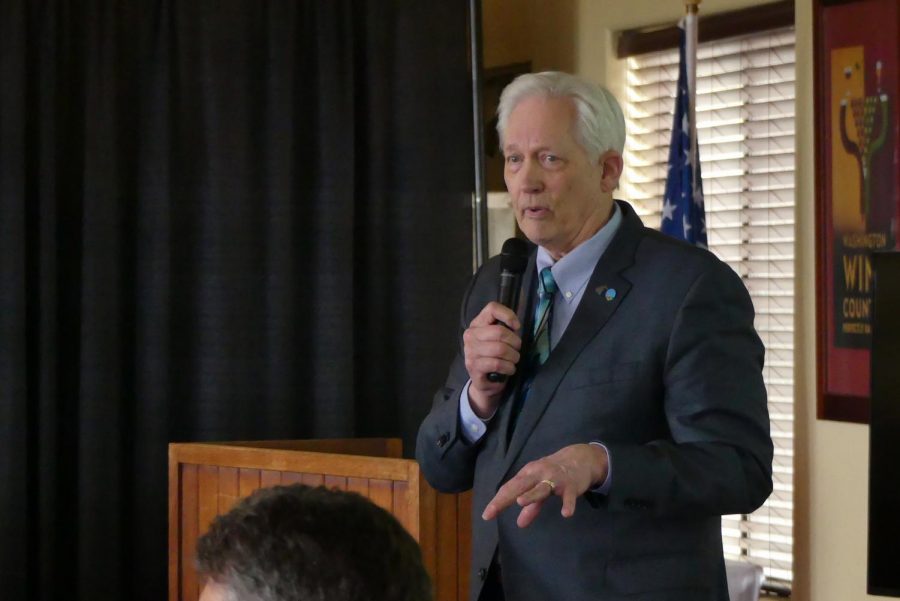 Mayor Glenn Johnson stresses the importance of intergovernmental cooperation during the State of the City address on Tuesday afternoon at Banyans on the Ridge.

Pullman Mayor Glenn Johnson said Pullman is working to make life better for residents with plans that include more disability access, one-stop care at Pullman Regional Hospital, a new airport terminal and a 311 app to contact city officials at the State of the City address Tuesday.

“When I first became mayor of Pullman in 2004, I said at that time, while speaking to service groups, that Pullman had an inferiority complex,” Johnson said. “One part of my campaign was a positive voice for Pullman, and I can say that I have been doing that.”

Johnson mentioned ongoing projects like the future of Pullman City Hall and the new Pullman-Moscow Regional Airport terminal. He also discussed improvements planned for the Pullman Regional Hospital and the various park projects in the city.

Construction work on the new City Hall will begin in the second quarter of 2019, he said, and the move-in date is expected to be in the first quarter of 2020. The old City Hall will remain functional for a couple of years to facilitate district court operations.

“We did a bond issue here, where we bought [the new city hall] for $3.5 million dollars,” Johnson said. “That includes a six-acre lot, two building and a great rec center.”

Johnson said part of the bond issue also covers plans for a Lawson Garden House, as well as a mobile stage, which is expected to finish before the National Lentil Festival event.

He said Mary’s Park at 1570 SE Johnson Road will receive playground equipment that is the American Disability Act (ADA) accessible, which enables children with mobility disorders to play there.

He said Pullman Regional Hospital will receive improvements like a one-stop care building for women and children, as well as provisions for electronic, centralized medical records.

A new terminal for the Pullman-Moscow Regional Airport is also under the works, Johnson said, as the airport officials get ready to unveil its new runway.

The runway will feature a landing device that will assist aircraft in aligning with the runway, Johnson said. The current runway will be closed from Sept. 9 to Oct. 3 to make the final installations on the new one.

Johnson said work on State Route 26, which was expected to be completed in 2025, has been added to the state transportation budget. It is now expected to finish by 2020 or 2021 at the latest, he said.

“I think, as we grow as a city, we have more of a responsibility to try and put our resources into a way that’s easy to understand — to see how the city is doing financially, in real time,” Lincoln said.

He said the city plans to launch a 311 app that would enable citizens to alert city officials.

“[The] app is a way to basically drop a pin on a map, have comments on what you wanted us to focus on [like] potholes,” Lincoln said. “It’ll help you track what the progress is on that.”

Lincoln said they have plans for a small student housing project near North Grand Avenue, estimated to cost $40 million.

He said they are in the process of creating a master plan for downtown Pullman as well.

“We have a lot of good stuff going on,” Lincoln said.