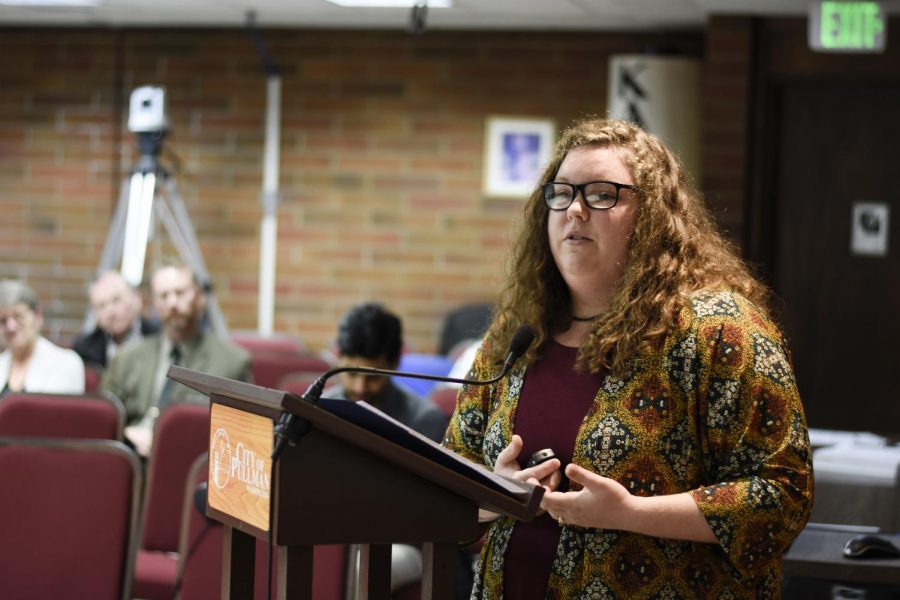 Britnee Christen, tourism director for the Pullman Chamber of Commerce, lays out ideas to help make Pullman a destination for travelers and cyclists in addition to photographers.

Councilmembers unanimously approved the resolution for the Pullman Regional Hospital ballot proposition on April 23 during the meeting Tuesday night.

City Administrator Adam Lincoln said the resolution is in support of the issuance of $29 million bond for the hospital.

Councilmembers approved Pullman Chamber of Commerce’s request for a lodging tax grant in an amount of up to $20,000 for the Field Fest 2019 event to be held on Sept. 28.

Councilmembers also passed a resolution to approve necessary upgrades on Spring Street. The operation includes upgrade of utility pipelines on Spring Street and was given to Motley-Motley Inc., a construction company, said Planning Director Pete Dickinson.

Britnee Christen, tourism director for the Pullman Chamber of Commerce, presented councilmembers with “Visit Pullman,” a marketing strategy to promote Pullman as a destination and home base for those who are exploring the Palouse Scenic Byway.

“We want people to know that Pullman is the destination because it has the amenities and it is the gateway to the by-way,” Christen said.

She said they were aiming to focus on bicyclists, motorcyclists, families, retirees and Pacific Northwest adventurers through the campaign.

Christen said she participated in the Mead & Hunt Air Service Development Conference and had the opportunity to represent and pitch Pullman to the different airlines.

Mayor Glenn Johnson asked whether they saw more information requests come in after the three-hour commercial for Pullman during GameDay.

Christen said although she does not have the exact figures from last year, GameDay’s arrival provided them with a lot of calls, as well as a lot of visits to their website.

Thompson said he met with Gillig Corp., a transit bus manufacturing company from California, to look further into the potential of electric buses.