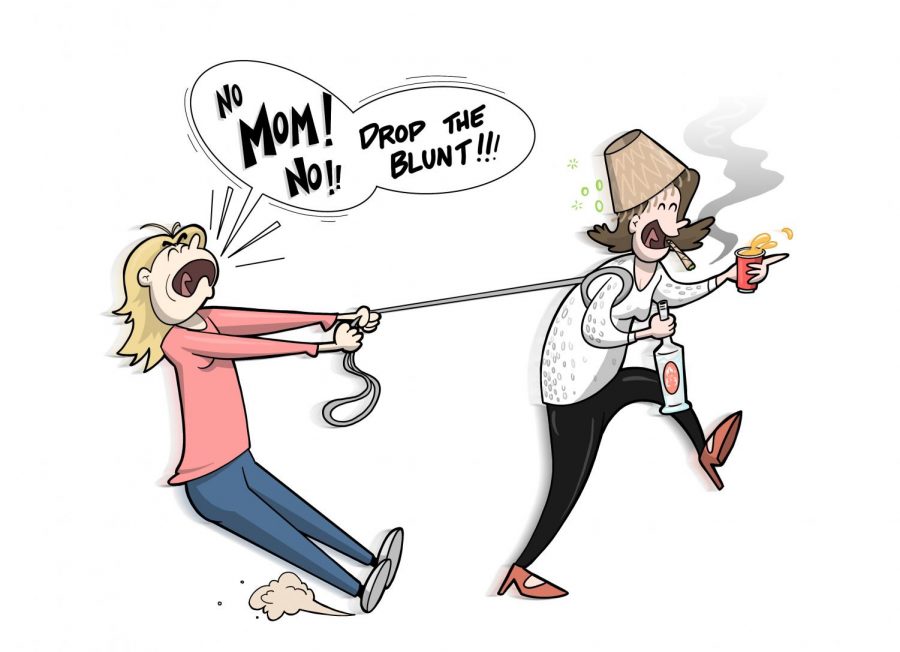 Satire (noun): the use of humor, irony, exaggeration or ridicule to expose and criticize people’s stupidity or vices, particularly in the context of contemporary politics and other topical issues.

None of this is real. It’s a f-cking joke.

When then-17-year-old Kylie Redmond received a banner in the mail proclaiming that she was a “Future Coug,” she didn’t think much of it. Her mailbox had been stuffed to the brim with college junk mail for weeks, and the package from WSU brought her first disbelief, then excitement.

WSU had admitted her, and she was on her way to Pullman in the fall.

Now as her third Mom’s Weekend approaches, Redmond, a junior chemistry major, wishes she’d paid more attention to the signal the school tried to send her with the banner.

“I wish I didn’t have to talk about this,” Redmond said. “I wish Mom’s Weekend last year hadn’t happened the way it did, but I need to warn everyone to keep the same thing from happening to them.”

The weekend was supposed to be innocent, mother-daughter bonding time. Redmond’s mother Abigail, a WSU alumna, missed the previous year because she was attending her high school’s 25-year reunion. Redmond said they were going to go to the plant sale and take a pottery class.

Abigail — or Abby, as she prefers — had always been a “cool mom,” Redmond said, so it wasn’t too strange when she wanted to tag along to a party Redmond had been invited to. Normally she would have said no, but it seemed like a cute moment and something her friends would think was funny.

Abby didn’t go in with any distinct plans, she said, but she “wanted to see what could happen.”

“I’ve been a single mom for many years now,” Abby said. “And honey, there’s a reason condom sales spike on the Palouse around Mom’s Weekend.”

The party was fun, Redmond said, and at first, bringing her mother felt like a good idea. Abby seemed to be acting as a wingman for Redmond, helping Redmond talk to her crush Jonah.

But then she noticed the conversation shifting to fewer words and more gestures — gestures not directed at Redmond. That’s when Redmond realized she wasn’t getting help from her mother.

“The night only got worse from there,” she said. “I went to the kitchen to get a desperately needed drink and when I came back, they were both gone.”

Redmond said she went looking for her mother, but she doesn’t recommend other people in her circumstance do the same.

“What I saw, I can’t unsee,” she said. “If anyone makes the same mistakes as me and ends up staring into a dark bedroom at a Mom’s Weekend party, my only advice is to blackout. Just drink so much you can’t remember.”

The next few weeks were a blur, Redmond said, but all she knows is that now, Jonah isn’t her crush — he’s her stepdad.

This weekend marks a full year since the tragedy that changed Redmond’s life forever. But for Jonah, who has changed his last name to Redmond to show Abby he’s a progressive guy, last year was just another Mom’s Weekend.

“Oh, yeah, last year wasn’t the first time that’s happened,” Jonah said. “I’m like a super-super-senior, so I might be like, five or six students’ stepdad.”