WSU looks to break two-match losing streak, get back on track in Pullman 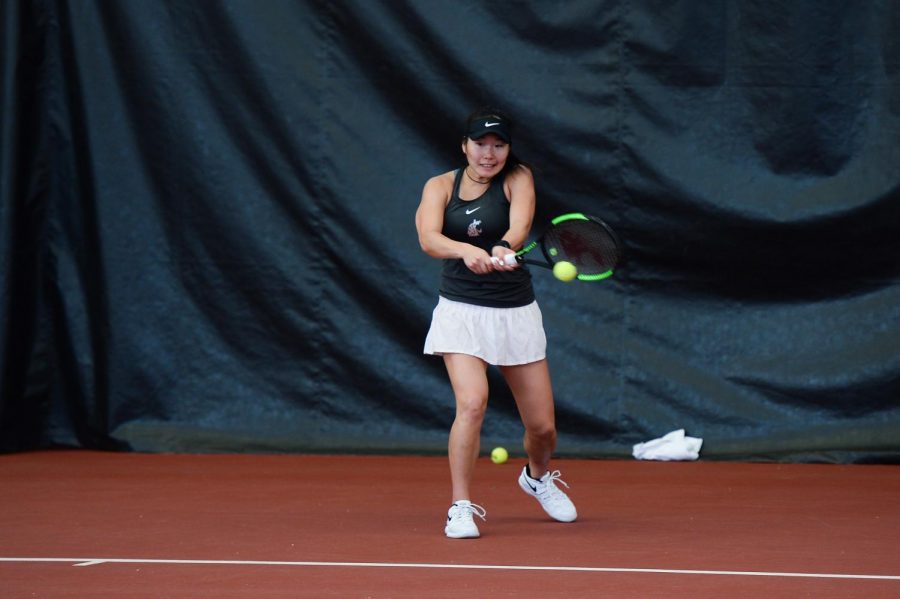 Freshman Yang Lee hits the ball during her match against Boise State on Saturday at Hollingbery Fieldhouse. WSU is currently on a two-match losing streak.

After two consecutive road losses, the No. 42 Cougar tennis team returns home to Hollingbery Fieldhouse to face UCLA in their next contest.

With three matches to go before the Pac-12 Championships, WSU is going to need to pick up every win it can get.

The Cougars’ struggles have mostly come from tough conference losses against currently ranked teams. WSU was swept by No. 3 Stanford before losing 4-3 to No. 17 California last weekend.

The Cougars recent losses will have to soon be forgotten as the next pair of California universities are coming to Palouse.

WSU will start with a tough contest as No. 10 UCLA is looking to keep dominating the Pac-12 conference play. The Bruins swept their past two conference opponents and their only loss came from a close 4-3 match against the then-ranked No. 7 Stanford.

WSU Head Coach Lisa Hart knows that UCLA has highly ranked players that will force her team to play their best in each set.

“We’ve worked a lot on our doubles,” Hart said. “I’m hoping we get that point and that it will give us momentum going into singles.”

Following UCLA, the Cougars will face No. 13 USC in the second match of the weekend. The Trojans are coming off a tough 4-1 loss to No. 8 Pepperdine, however, they beat UCLA 4-1 during non-conference play.

Hart said her players will have to play their best tennis to have a shot at beating both the ranked conference teams.

“They’re good, we’re going to have to play well to have a chance,” Hart said. “Our players are prepared, ready and excited.”

Although WSU is facing ranked opponents, having the home-field advantage will be helpful as the Cougars’ currently hold a 7-1 record at Hollingbery Fieldhouse.

Senior tennis player Tiffany Mylonas said she thinks her team is ready for the competition and anything is possible in these upcoming matches.

“I think losing made us understand that it’s time, it’s time to go now,” Mylonas said. “We don’t have any more choices … it’s not going to be easy but everything’s possible so we’re going to make it work.”

The Cougars will first play against the Bruins at 1:30 p.m. this Friday and will play USC at 11 a.m. on Sunday at Hollingbery Fieldhouse.