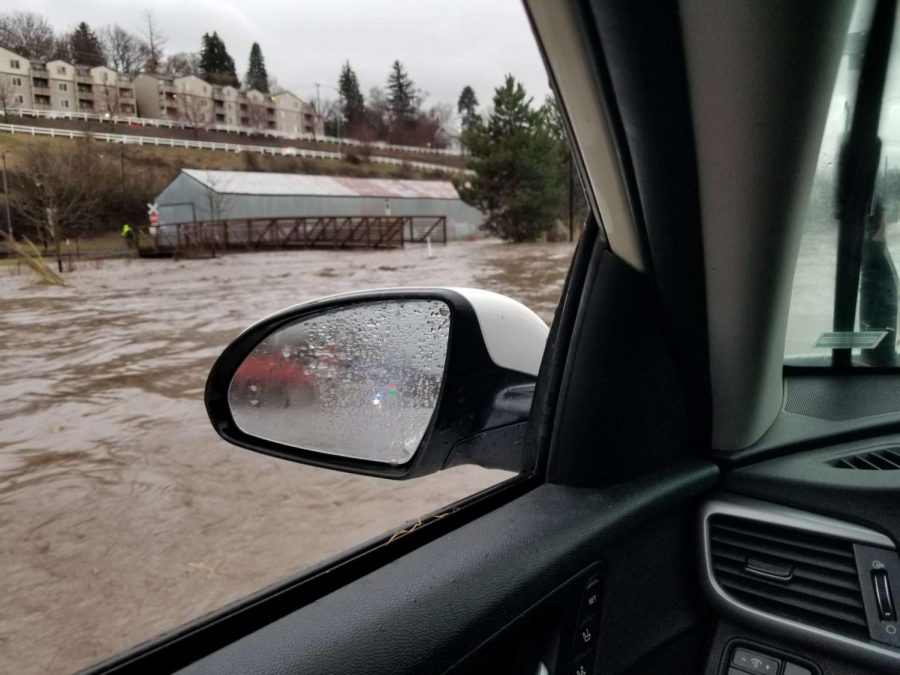 Jonathan O'Brien, who owns Cave Cutz in town, snaps a photo of his view from his car as he floats down the flooded Grand Avenue.

Some people used air mattresses to float the raging river down Grand Avenue Tuesday night. But Jonathan O’Brien one-upped them when he rafted down the street in a Kia Optima.

“I legitimately f-cking floated,” he said.

O’Brien, the owner of Cave Cutz, was driving north on Grand after work when he hit about two to three inches of water covering the roadway.

He was following a pickup truck that was clearing the path and allowing his mid-size sedan to trek on. Unfortunately, once O’Brien reached the laundromat on Grand, the water was about 4-feet deep and he quickly realized he was in trouble.

Things became even worse when the pickup took a left and all the water it had plowed out of the way rushed onto O’Brien’s Kia, nearly submerging it. Then he started to float near Nye Street and was along for the ride.

“It’s the craziest sh-t I’ve been through in a long time,” he said.

When O’Brien realized he had no control of his car, he turned it off, cranked up the radio and lit a cigarette. He then dialed his girlfriend, Sylvia Aguila, and informed her about his precarious situation.

“I called her while I was floating,” O’Brien said. “She said she had a burger waiting for me and I was like just throw the f-cking thing out.”

O’Brien was not scared or nervous but there was one thing on his mind.

“All I could think about was my insurance better cover this,” he said.

O’Brien took photos as his car spun aimlessly without any water entering the vehicle. He floated for fewer than five minutes and about 100 yards before his car came to a rest just before reaching Ritchie Street.

He sat in his car another 10 minutes before the fire department came and told him he needed to exit the vehicle.

Wading through shin-deep water, O’Brien made it to shore safely. He stood there for another 10 minutes and realized there was nothing he could do to rescue his car, so he went home and tried to relax.

“I went home, lit up a joint and just jumped on [Call of Duty: Black Ops 4] because I just wanted to zone out and forget,” he said.

O’Brien called a towing company and told them what happened to his car, but they just laughed and hung up the phone.

Just past midnight, O’Brien headed back to retrieve his car. The water had receded, which allowed O’Brien to reach his vehicle with ease. The problem was starting it.

Muddy water shot out the tailpipe as he turned the key about 10 times before it finally started. With a weed-filled front bumper, O’Brien managed to drive his car home, but he was surprised by the durability of his Kia and that it even started.

“Kind of makes me want another one because the thing is a tank,” he said.

O’Brien is getting a rental car from Enterprise while he sorts out the damage to his vehicle. He hopes his insurance company determines his Kia is totaled because he isn’t to blame.

“It’s definitely not my fault I got hit by a river,” O’Brien said.