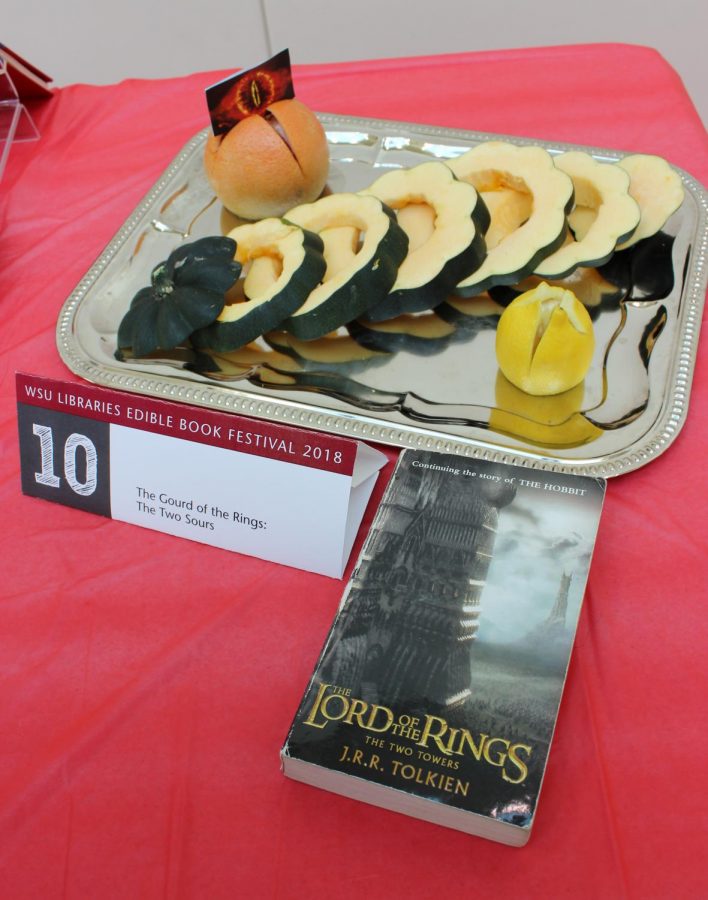 Squeak Meisel, chair of fine arts at WSU, says he likes watching students be fun and clever with their creations. Erica England's advice? Don't overthink it.

WSU Libraries will be hosting its fourth annual Edible Book Festival at 2:30 p.m. Friday in the Terrell Library Atrium as part of Mom’s Weekend.

According to WSU Libraries’ Edible Book Festival webpage, entries must follow two criteria: They must be made from edible materials and relate in some way to books. This second rule “is often interpreted broadly,” according to the website. Participants can receive the award for the “Punniest” entry, as well as People’s Choice and Best Visual Presentation. There are also links to previous entries and winners available through the website.

Event organizer Erica England said this year’s festival aligns with National Library Week as well as Mom’s Weekend, which it has not done in the past. She said this year saw a record number of registrants.

She said entrants include not just librarians, but moms, WSU staff, community members and students. Organizers then invite “celebrity judges,” she said, who are well-known people around town and WSU’s campus.

This year’s panel includes Squeak Meisel, chair of fine arts at WSU. Meisel said this is his first time taking part in the Edible Book Festival and that he will be looking for submissions with a strong connection to concept.

Since Meisel spends much of his time observing and critiquing art, he said he responds well to a piece displaying both creativity and aesthetics. He said he also appreciates when an artist can juggle subject matter, form and content — in other words, what the art portrays, its physical qualities and what it means.

“If something surprises me, I respond to that,” he said. “I spend my career looking at things, and so that’s less likely to happen.”

He said he has had students in the past who made edible artwork. One made Marie Antoinette’s head out of cake. Another made a bust of himself out of frozen hamburger, then recorded himself feeding it to his dogs.

He said the meaning of certain things can change over time, so it’s important for an artist to take in historical context and current environment when developing a concept piece.

In regard to judging art, including edible pieces, Meisel said avoiding the idea of liking or disliking something is key to removing bias.

“In our department, those arbitrary designations have no place,” he said. “It doesn’t matter if I like it or not, if I love it, it’s really more about what it does and how it affects me.”

Other judges for the event will include Jamie Callison, executive chef and catering manager with the WSU School of Hospitality Business Management, and Joanna Bailey, library director of Neill Public Library.

England said past entries have included “The Gourd of the Rings” to represent J. R. R. Tolkien’s most famous series, and donuts with crushed cookie toppings called “The Dirty Dozen.”

“It doesn’t have to be complicated, and that’s what always cracks me up, is how much people overthink these entries,” she said. “I think some of the best have just been simple, clever ideas.”

While entries for the competition are closed, students, parents and the general public are invited to attend. Light refreshments will be available, including the baked entries after the judging is complete.

This story has been updated to reflect the correct attribution in the photo caption.