Dance group hopes to get rid of stigma around pole dancing 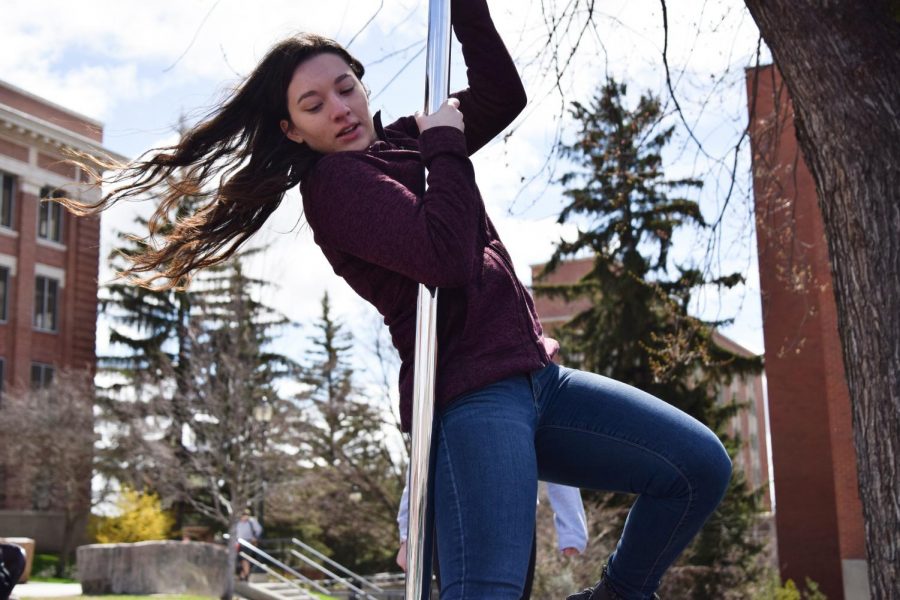 Sophomore psychology major Alyssa Castrillon practices on a pole in preparation for Cabaret Night, an event put on by the Aerial Dance Society, on Wednesday at the Glen Terrell Friendship Mall. Cabaret night will take place on Saturday, April 13 in the Jones Theater.

The Aerial Dance Society will combat the stigma around pole dancing through strength, agility and artistic ability this weekend at its second annual Mom’s Weekend Cabaret Night.

“There’s a lot of stigma behind pole — we have people call us names and people who ask us to show our breasts,” said Alexa Scott, Aerial Dance Society founder and 2018 WSU graduate. “We’re trying to show people that this is a sport, but it’s also okay if you do this as a stripper or a sex worker in a club for money.”

The Cabaret Night will include performances by over 20 members of the Aerial Dance Society in multiple dance styles, including contemporary, ballet and comedy, Scott said, as well as the sultrier performances paired with their traditional high heels.

There will be several men performing in the Cabaret Night as well. Freshman wildlife ecology and conservation sciences major Gracie Sutton joined the Aerial Dance Society in September and said the inclusiveness of the group is incredibly important to her.

“It’s a very inclusive environment. We accept everyone and every type of person,” Sutton said. “We have a whole bunch of different body types, and a lot of people are kind of shocked that we have males involved in our group, but we think of it as, ‘Why not?’ ”

Scott said she hopes the young tradition will live on for Mom’s Weekends to come because it’s the only event like it on campus.

“We have some sultry performances, and I definitely think that moms enjoy breaking away from whatever world they’re in temporarily to enjoy this show,” Scott said.

Sutton said having the opportunity to learn to pole dance and watch it can be very empowering for women.

“It’s important because it helps lessen the stigma around pole dancing and the idea of if you’re a pole dancer, you’re a stripper because that’s not accurate,” she said. “It makes you branch out of your shell and help you become a person that you’ve always wanted to be.”

“I’ve gotten a lot of comments from dads like, ‘Wow, I didn’t send my daughter to college to do this,’ but it’s just an extracurricular activity for somebody,” Scott said. “They’re picking up strength, flexibility and grace, and what’s wrong with that?”