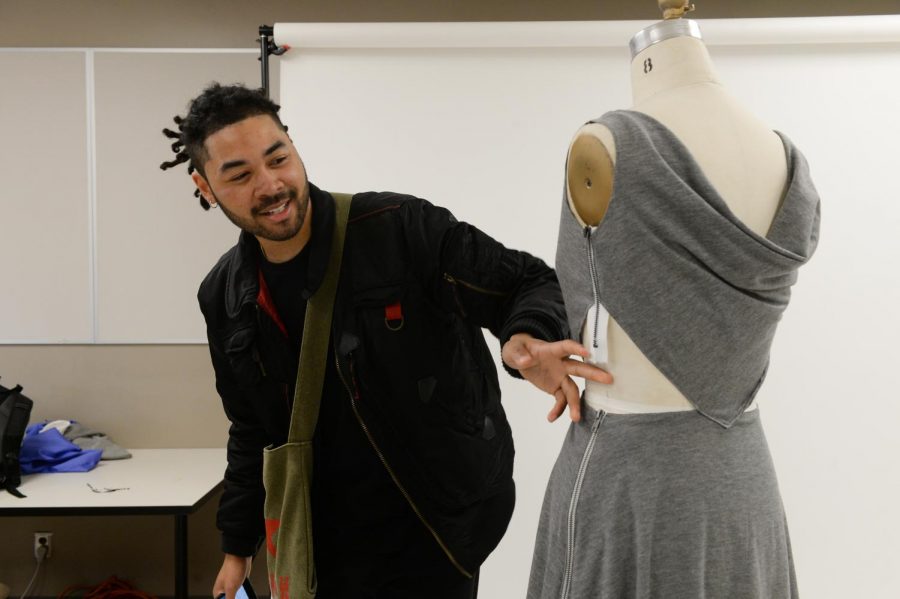 One fashion student used his family’s hardship as motivation to make an impact with his college career.

“If we have a semester-long project, I always grind my ass off,” Robinson said. “I feel like I’m obligated to do my best for my family. I can’t blow this shot — I’m not going to do just basic work.”

The Apparel, Merchandising, Design and Textiles (AMDT) faculty recognize several students each year as outstanding designers and merchandisers to be celebrated at the annual Mom’s Weekend Fashion Show. Robinson received the recognition of Outstanding Junior Designer for his outside-the-box designs, he said.

“His designs tend to have a pretty unique aesthetic,” AMDT associate professor Carol Salusso said. “He brings together fabrics you wouldn’t assume would go together so they have a freshness. I don’t remember the most [about] what he designs, though, I remember his excitement about it.”

Robinson said he feels inspired by his family. His mother is a first-generation Cambodian immigrant. Her parents met in a refugee camp in Thailand when they fled the Cambodian genocide carried out by the Khmer Rouge party. Robinson’s grandparents brought their young daughters to Washington state as refugees.

Sovann’s African-American father’s family comes from sharecropping, he said. His parents were 16 when he was born and they worked their hardest so Robinson could follow his dreams, he said.

“I’m so proud of the past blood, sweat and tears of my family to give me the privilege to follow a purely creative goal,” Robinson said. “I can’t be proud of myself. I give all the credit to my upbringing.”

Robinson said that design found him, not the other way around. A friend got him involved in the design world and he thought of design as his “fall back” plan. He decided if he didn’t find something else he loved, he would be fine with design. The longer he stayed and the fonder of his peers he became, the more natural the fit felt.

“I’ve seen my peers grow and now I want to see what they can do,” Robinson said. “I couldn’t care less if I’m good at designing. I just like the energy, I like the creativity and I just love the environment.”

Robinson pulls inspiration for his designs from his senses. He said he often takes note of the world he’s in, noticing the color of a jacket or the certain style of someone’s shoe. Art has recently become an inspiration for him as well as he’s seen the way some artists can combine colors to create a mood. He’s also inspired by music, specifically abrasive experimental hip hop.

Robinson’s designs are often patchwork, asymmetrical and deconstructed-looking, he said, as he likes to be creative and out of the box. His favorite design, he said, was an asymmetrical patchwork jacket made with bird-print and plaid fabrics. He more recently used the leftover fabrics for a matching skirt that uses negative space, visible zippers and an uneven length.

“If you make something that isn’t well-done and doesn’t serve the people that use it, you’ve wasted your time and money and resources,” Salusso said. “Design should be purposeful, and [Robinson] does a good amount of that with the patchwork pieces.”

A piece he designed and described as “boring but cute that you might be able to find in Abercrombie” took the idea of a simple cowl neck dress, in a different direction with his creative touch. Robinson said he loves negative space and the look of a visible, hanging zipper that gave the “boring” dress a slightly edgier look.

“A lot of designers love the process, like the sketching or the sewing — I hate all of that,” Robinson said. “I just want to see the final product on a person. Starting a vision, working through the vision and having it be exactly what you imagined is the most rewarding feeling.”

Robinson’s patchwork jacket will be featured in the Mom’s Weekend Fashion Show at 6 p.m. Friday in Beasley Coliseum. Admission is $15 in advance and $20 at the door.