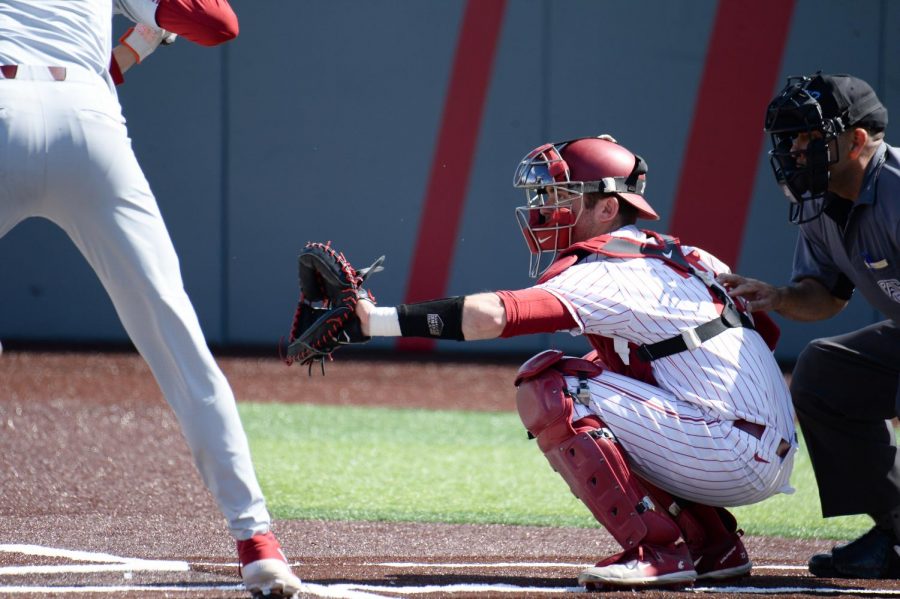 Senior catcher Rob Teel prepares to catch a pitch against Stanford on March 31 at Bailey-Brayton Field.

WSU baseball will look for its third series win of the season when they host Oregon for a three-game series starting Friday.

The Cougars (7-23, 0-9) are coming off losses in a three-game road series against Cal this past weekend.

WSU was set to play Seattle University on Tuesday at Bailey-Brayton Field, but record rainfall caused the game to be canceled.

The Ducks (19-12, 5-4) arrive in Pullman with some momentum after taking down in-state rival No. 7 Oregon State 12-8 on Tuesday in Corvallis.

WSU has not won a series since its first home series of the season March 8 to March 10 against California State University, Northridge.

Head Coach Marty Lees said the Cougars are getting closer to where he wants them to be.

The Cougars have also lost 15 of their last 16 games. Lees said the team is doing everything they can to get out of this slump.

“It’s something that our players and coaches are very aware of,” he said. “We’re working hard every day to try to clean that up.”

WSU will step on Bailey-Brayton Field for only the eighth time this season, after playing 23 of its 30 games so far this season on the road. The Cougars have a 3-4 home record and a 4-19 away record.

“They’re not quitters,” Lees said. “Some of the box scores maybe don’t show how relentless they really are. They are working, nobody likes losing … These last 25 games, we’re going to try to be the best we can.”

Freshman right-handed pitcher Brandon White has started seven games this season and has a 2-4 record. He has a 4.64 ERA and 33 strikeouts in 33 innings pitched.

White said he is excited about playing at home.

“It’s always fun to travel, but it’s going to be nice to be in Pullman for this one, especially with how much we’ve traveled this year,” White said. “We’re looking forward to hopefully a big crowd. I know that my family will be here for Mom’s Weekend.”

Looking ahead to Oregon, White said he was aware of the talent on the team.

“They have a couple guys that are out right now, but they’re playing good,” White said. “They beat Oregon State, and they’re a competitive team. We’re going to have to play the best we can to get a win.”

The Ducks have four players with a batting average over .300 but they lack a dominant pitcher as each of their starters has an ERA of 3.79 or higher.

First pitch is set for 5:05 p.m. Friday at Bailey-Brayton Field. The game can also be seen on the WSU live stream.