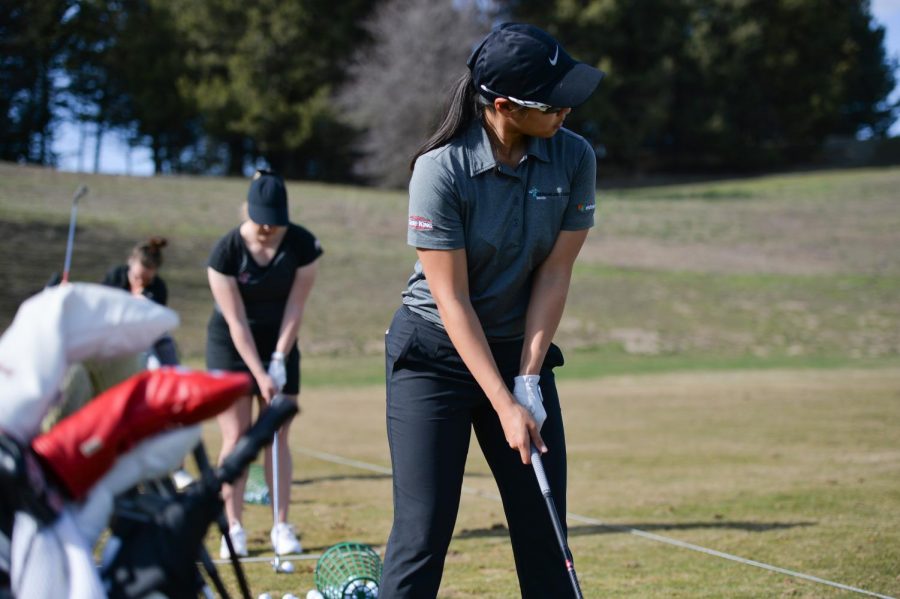 Freshman Amy Chu focuses on her tempo and breathing during an April 1 practice at WSU’s practice facility.

WSU women’s golf will compete in the Pac-12 Championships Monday through Wednesday at the Palos Verdes Golf Club in Palos Verdes Estates, California.

Competing for WSU will be junior Marie Lund-Hansen, senior Madison Odiorne, redshirt sophomore Emily Baumgart and freshmen Amy Chu and Darcy Habgood. The course is a par-71 and 6,131 yards.

Head Coach Kelli Kamimura said she knows the conference is tough and wants her team to play at its best. She said the Cougars want to have three solid rounds and know they left it all out there.

“It’s kind of like rest, fine-tuning and getting caught up in school so that when we go to Pac-12s, their minds can be clear and focused on golf,” she said.

The areas that need fine-tuning differ for each athlete. For some, it is elements of putting. For others, it is stroke technique, speed, posture or chipping.

The team got more creative as they prepared for competitions with the weather challenges this spring, Kamimura said. She said she thinks there are positives that have come from that.

When the team practiced indoors, there were opportunities to work on more technical parts of the game, she said.

“We’ve really been able to hit on that quality practice and look at the different ways that we can get better indoors,” Kamimura said. “But for the Pac-12 Championships, really it’s been playing and competing.”

Over the season, the Cougars have improved how they prepare for a tournament by managing their expectations and focusing on their physical and mental games, Kamimura said.

“There has been a lot of mental and physical growth this season that we look to carry over to the years ahead,” she said.

Last year, the Cougars tied for eighth at the Pac-12 Championships with Oregon, posting a team score of 896 (+32) at Broadmoor Golf Club in Seattle, Washington.

The first pairing of players will tee-off at 8:30 a.m. Monday. Live results of the Pac-12 Championships will be posted on golfstatresults.com.