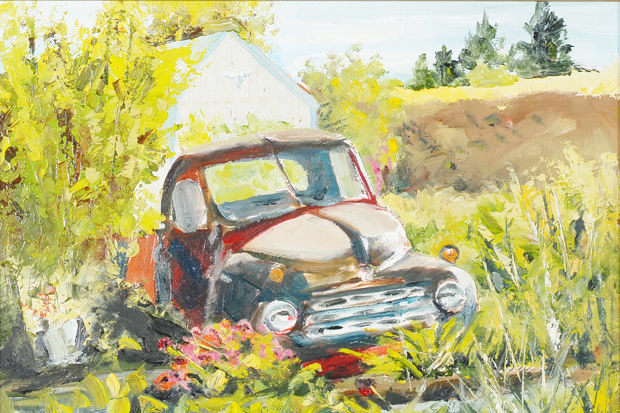 The Phoenix Conservancy hosted the annual Artists of the Palouse Benefit on Saturday in the form of a silent auction. The event showcased local artwork and drew awareness to the importance of conserving the environment.

Ben Stone, manager of the event, said the combination of science and art is crucial when it comes to raising environmental awareness.

“We’re a lot of scientists,” Stone said, “and we try to be as science-based as possible, but there’s a whole other side to communication that isn’t just scientific research.”

Art has the ability to convey the more emotional aspects of what nature means, Stone said. Inviting artists to express themselves in the silent auction helped them send the message of environmental awareness that was not just statistics, he said.

Daquarii Rock, executive director of United Way of Pullman, said the event’s building was an art piece in itself. Built in 1892, The Seasoned House underwent several renovations, and the public can now rent it for events, Rock said.

“[The Artists of the Palouse Benefit] is one of our favorite events,” she said, adding that events like this are helpful in allowing the Seasoned House to become active in the Pullman community.

“We’re trying to participate with community organizations that get the downtown [area] more active,” Rock said.

As attendees milled around The Seasoned House, they viewed and bid on art by well-established artists like the late Kay Montgomery, a co-founder of the Palouse Watercolor Socius, as well as lesser-known artists who are just beginning to get their art out into the public sphere.

Project managers displayed and auctioned off their own work that related to the importance of nature. Chris Duke auctioned off a woodwork picturing the silver silhouettes of fish as though they were swimming upstream.

Across the room, paintings by Andy Sewell, a local Idaho-based artist and donor to the Phoenix Conservancy, were up for auction. Rainbow-scaled fish recently-caught or just emerging from sparkling waters colored Sewell’s works.

Artists like Sewell who incorporate the cultures and people who live on the land in their artwork are who connect deepest with the Phoenix Conservancy, Stone said.

“They’re outdoorsmen. They like being outdoors — whether they’re from here and really care about the region, or whether they’re moving here, and they just love the beauty of the area. They really do contribute a lot,” Stone said.

Bringing life to Pullman’s downtown area is a goal of Rock’s she said she will continue to strive toward through hosting more community events like this one. The silent auction was the second Artists of the Palouse Benefit event of its kind, and organizers plan to continue it annually.