Trojans take down Cougars in Pullman 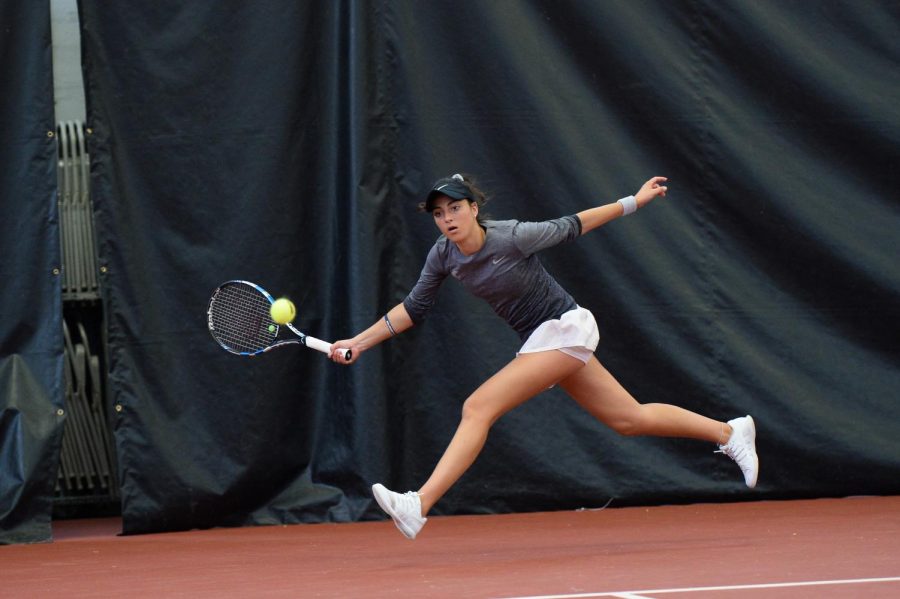 Senior Tiffany Mylonas serves during the match against USC on April 14 in Hollingbery Fieldhouse.

Despite a valiant effort, No. 42 Cougar tennis couldn’t best No. 13 USC and lost 4-1 Sunday at home.

The Trojans (17-5, 7-2) locked down the day’s match early when they earned the opening doubles point, something the Cougars (18-8, 3-6) have been having trouble with in conference play.

Head Coach Lisa Hart said her players performed well given the competition. She also said she wants her team to improve in doubles play before the Pac-12 Championships.

“I think we’re actually playing our best tennis right now, and with our doubles, we’re playing really well,” Hart said. “We just got to make sure we make the right decisions on important points.”

Opening with doubles play, WSU seemed to be ahead of the game as they held a 2-1 lead in all three matches.

Junior Melisa Ates and freshman Yang Lee had been getting boosts from continuous errors by the Trojans, but once they fixed them the Cougar duo fell 6-4.

While freshman Hikaru Sato and senior Tiffany Mylonas were battling in a 6-6 tiebreaker, sophomore Michaela Bayerlova and senior Aneta Miksovska couldn’t seal the deal in their match, losing 7-6.

With the Trojans now up 1-0, the Cougars needed some stellar singles play to stay alive but were unable to deliver.

Scoring the only point for the Cougs was Bayerlova, who claimed her match 6-1, 6-3 to even the score at 1-1.

Bayerlova said she was proud of the team’s effort despite the final score and earning a point for her team.

“We’re just playing all out. We’re playing our best tennis,” Bayerlova said. “I fell back a little bit, but I closed the match so I’m happy.”

After Bayerlova’s win, troubles struck the Cougars as both Sato and Mylonas had strong first sets but lost steam in their second and third sets.

Sato was the first to fall in singles. She fell behind early in the second set and couldn’t win a game in the third losing 6-2, 3-6, 0-6.

Mylonas then failed to strike a comeback for the second time this weekend after overcoming a deficit in her singles match against No. 10 UCLA on Friday. After a slow first set win, Mylonas struggled to keep the lead losing the second set followed by being shutout in the third to fall 6-4, 3-6, 0-6.

The Trojans were now in a 3-1 clinching position and WSU was looking forward to strong starts from Miksovska and Ates. Unfortunately, neither of them finished their matches as Lee fought back to win the second set but couldn’t claim the third. She lost 3-6, 6-4, 4-6.

Hart was positive after the match and said the players who were unable to finish their matches would have won if the team kept playing.

“I think we’re actually playing really good tennis. USC is a really good team,” Hart said. “We lost three three-setters, and I think [Ates] and [Miksovska] would’ve won so in my mind, it was a 4-3 loss.”

Despite the ranked conference loss, the Cougars will look to keep their heads up as they host in-state rival No. 15 UW for a match at noon Saturday at Hollingbery Fieldhouse.