WSU Spokane received about $88,000 this year to expand, train facilitators for drug course 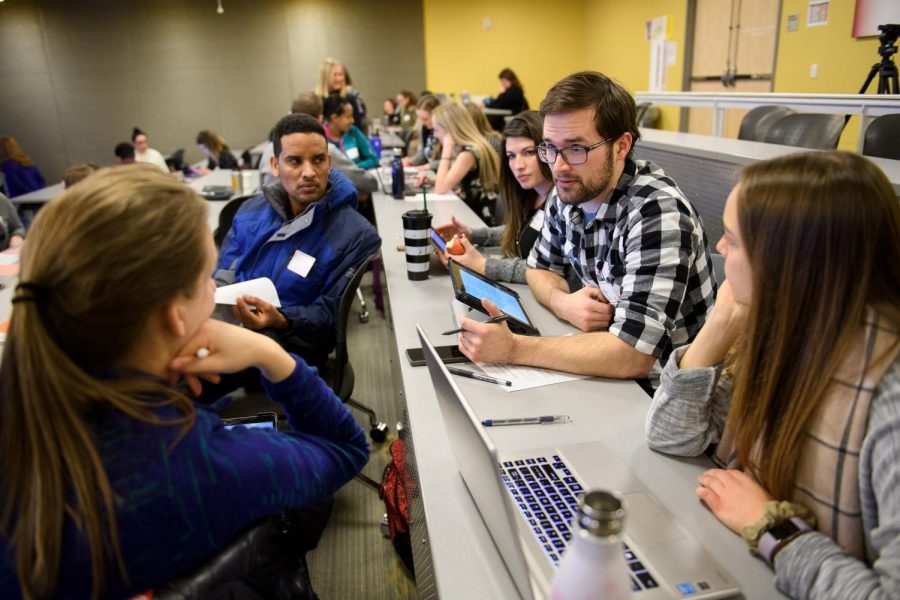 Students from several universities, like WSU and Eastern Washington University discuss with each other about opioid addiction and how they can prevent it.

A new two-hour seminar at WSU Spokane focuses on communication about opioids in the healthcare field.

The seminar emphasizes how to recognize someone who has an opioid addiction and how to look online to find out if people have received multiple opioid prescriptions, said Marian Wilson, WSU College of Nursing assistant professor.

The first class occurred in August. In January and February, the class was offered to more students, and WSU plans to continue with it, she said.

This gives WSU nursing, pharmacy and medical students an opportunity to work with each other, said Barbara Richardson, director of interprofessional education and research in the Elson S. Floyd College of Medicine.

WSU received a $70,000 grant from the Washington State Department of Health in 2018 to develop and try out the interprofessional session, Wilson stated in an email.

This year, another grant from the Washington State Department of Health gave WSU $87,668 to advance the program, distribute the curriculum and train facilitators, she stated in an email.

Wilson said students from different programs must learn how to work together because one provider alone can treat someone based on their knowledge, but collaboratively, they have a lot more expertise.

A provider, Wilson said, is a medical doctor, physician, nurse practitioner, physician assistant or even a pharmacist, if the pharmacist writes prescriptions.

Wilson said physicians should consult with pharmacists to know the best medication to give a patient. They should work with social workers to help patients who might need counseling.

Richardson said students work on their communication skills and talk about roles and responsibilities in the class.

The main goal is to learn how to communicate with other health professionals on this topic, she said.

One problem with pain management, Wilson said, is providers give patients opioid prescriptions because many of them do not have the education to know what else to do.

“Patients alone are not responsible for their addictions. Sometimes, healthcare, I think, allows people to become addicted because we don’t address their underlying causes,” Richardson said.

She said the class also focuses on the importance of not using stigmatizing language.

As an example, Richardson said providers should not say that someone has “dirty urine.” They should say a patient’s urine tested positive for a drug.

“Even saying that anyone is addicted can sound stigmatizing to some because that makes it sound like addiction is a choice. And actually, addiction is a disease,” Richardson said.

Wilson said they want to make this available for other campuses in the fall. There is a facilitator’s guide included in the curriculum, which will be accessible online so other universities can also use it and teach this session.

A $6,579 grant from the University of Washington Northwest Center for Public Health Practice allows WSU to change the program in a way that it can be taught in a rural clinic, Wilson said in an email.

Richardson said the goal is to use a changed curriculum for these clinics to identify resources and build networks that support patients.

In October, the class will be offered in Yakima to WSU nursing and pharmacy students, as well as to students from Pacific Northwest University in their physician program, she said.

“[We’re] just helping students understand that someone might be dependent on opioids, but they didn’t choose to be addicted,” Richardson said.