Participants asked senator about Medicare for all, nation’s deficit 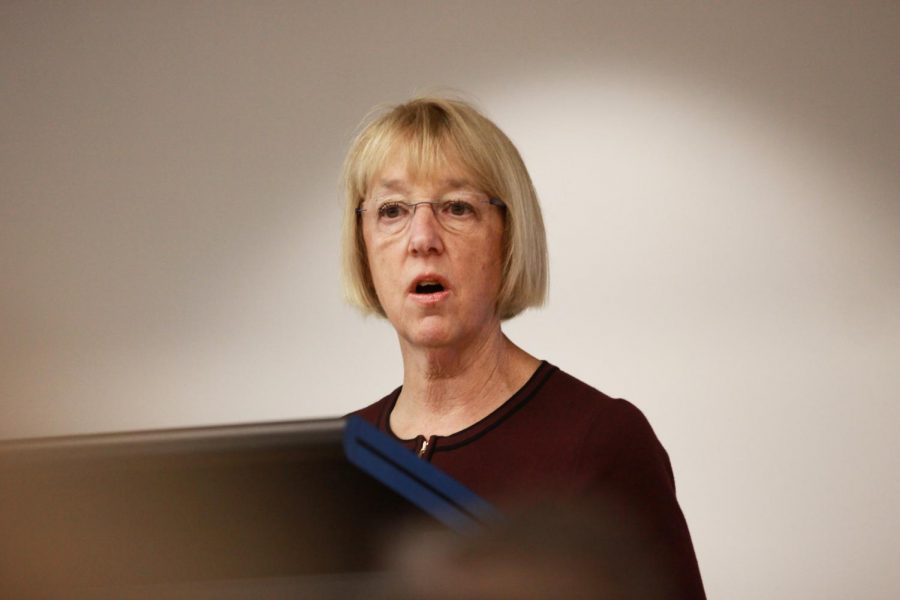 U.S. Sen. Patty Murray, D-Wash., says women pursuing a leadership role should not fear to lose a battle because perseverance is what matters in the long run, on Tuesday morning at the Chinook Student Center.

Murray said she became involved in politics when she attended WSU as a freshman. A policy that required women to wear dresses in the dining hall inspired Murray’s interest in changing it.

Murray said leaders need to risk speaking out and must support one another to stand up to bullies.

“Some things may be small, but you can take them on and make a difference,” she said. “Big or small, speak up.”

Murray answered questions submitted by students through the Foley Institute.

She advised women pursuing a leadership role to not fear to lose a battle because perseverance matters in the long run.

Murray said she was told she did not know the right people or have enough money. She said no one would listen to her and would call herself “Pats” so people did not know she was a woman.

“Well, I got a lot of advice like that, but now I’m standing in front of you as a United States senator,” she said. “I didn’t listen to them. Here I am.”

A student asked Murray if the increasing number of women in the Senate has changed its atmosphere.

Murray said male senators suspected the female senators would revolt when she began working. She said their mentality eventually changed when they realized women were there to accomplish the same tasks as men.

“It was a heavy, daunting experience,” she said.

There are currently 25 women in the Senate and 127 women in Congress, Murray said. She said this is a major improvement because the U.S. government needs more diversity.

Participants asked the senator about her views on filibuster reform, Medicare for All, America’s deficit, the Carbon Dividend Act and the Violence Against Women Act, though it failed to be renewed.

Murray said having a filibuster is a tool that helps the minority present their ideas to the majority. Everyone deserves the ability to have their voice heard, she said, and the policies today are thanks to filibusters.

She spoke about the consequences of partisan polarization. Murray said if senators do not try to understand why someone is expressing their views or why they find it important, nothing will happen.

Murray said Medicare for All is a great concept, but the reality is different and would take various changes for it to be established. The goal should be to have affordable healthcare, she said.

Senators are looking at how to reduce America’s deficit, which was influenced by tax cuts last year, she said. The tax-cut legislation was a quickly constructed act that has put the U.S. into more debt, Murray said.

There was a roundtable discussion where WSU students voiced their concerns to Murray on behalf of the student body before the Q&A event.

A student spoke about the need for more attention to the Office for Equal Opportunity and how they fail to support students. They spoke about how the drug culture on WSU’s campus needs to be addressed because Adderall seems to be as common as marijuana.

Students also spoke about the financial burden placed on students and how they can face homelessness to pay their tuition.

Murray told the students their input is necessary for change.

“I don’t want to just be sitting in an office in D.C. and do nothing about it,” Murray said.