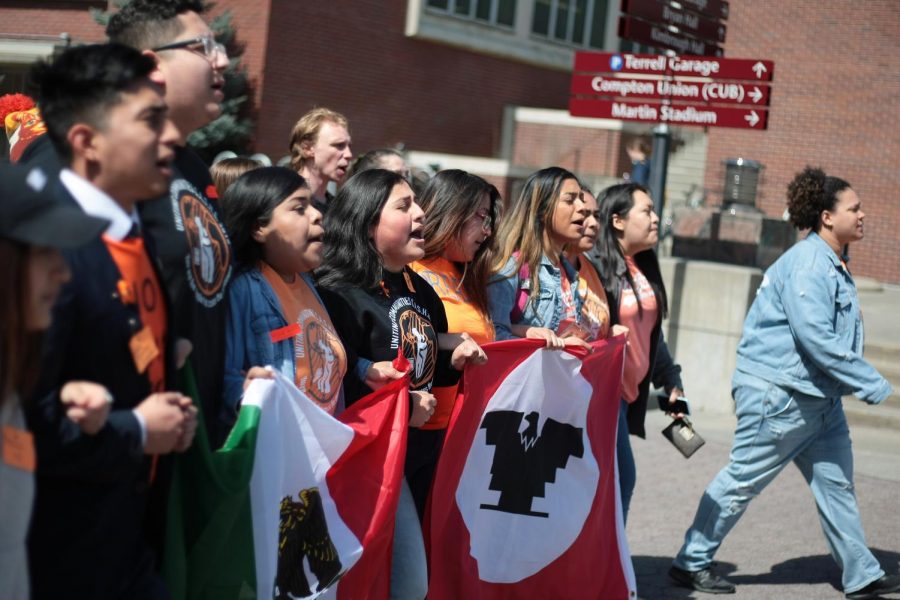 WSU students march up the mall chanting in support of undocumented students at WSU as a protest Tuesday afternoon on the Glen Terrell Friendship Mall.

Many WSU students expected the planned “Trump wall” replica on the Todd Steps as a demonstration about immigration policy, but instead, the WSU College Republicans were there to advocate for free-speech and gun rights with the support of constitutionalist groups from Washington.

“We’re here as a community to be allies for undocumented students and show support,” Chavez said.

A sign hung over the Holland-Terrell Library that read, “Immigration makes us stronger, diversity makes us better, unity makes the U.S.A.”

Students wearing orange walked down the mall with their arms linked as they chanted statements like “No hate, no fear, immigrants are welcome here,” and “I am somebody, I deserve full equality.”

Some student groups were unsure of whether the wall replica would occur but decided to show support for undocumented students, she said.

“Unity on campus is something that needs to be addressed every day,” Vargas said.

Amir Rezamand, president of the WSU College Republicans (WSUCR), said he wanted the free-speech demonstration to be organic and informal.

“We’re here to engage in a civil discourse,” Rezamand said.

Matt Marshall, state leader of the Washington State Three Percenters, and Joey Gibson, founder of the Patriot Prayer group, attended the protest with a few affiliates.

“If you think we are here to build a wall, come talk to us because that is not what we are here for,” Marshall said over a megaphone.

Supporters of the conservative groups met on the steps of the CUB with student groups and engaged in a discussion on immigration policy. Some individuals who had opposing viewpoints shook hands after the conversation.

Russell Schultz, an affiliate of Patriot Prayer, said the two sides needed to have a dialogue to dispel misconceptions about each other.

Affiliates of the Patriot Prayer group said they were frustrated with misconceptions about the purpose and intentions of their demonstration. They invited supporters of undocumented immigrants to have a dialogue about issues.

“I am tired of being called a Nazi and a racist,” Gibson said.

There were moments when dialogue between certain individuals became heated.

Orion Welch, who wore an orange sticker that read “undocu-ally,” said he refused to debate with a student with an opposing viewpoint.

“I know who he is affiliated with,” Welch said. “I have no respect for him, I don’t want to hear from him.”

The Young Americans for Liberty (YAL) had a “free-speech” beach ball for people to write their opinions on with a marker.

Thomas Conway, a member of YAL, said the ball is a way for the club to express their value of free-speech and expression. One of the statements written on the beach ball read, “extremes create divides.”