Cougars advance to WNIT semifinals with win over Iowa 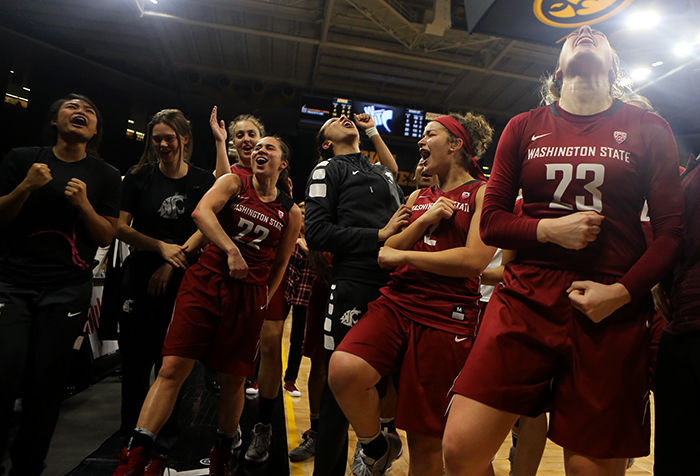 The women's basketball team celebrates after defeating the Iowa Hawkeyes 74-66 at Carver Hawkeye Arena in Iowa City on Sunday.

The thrilling postseason ride the WSU women’s basketball team is on continued with their win at Iowa on Sunday afternoon.

Facing elimination yet again, the Cougars (16-19) won their third road game in 10 days by a score of 74-66 to advance to the WNIT semifinals. Playing in front of more than 5,000 hostile Hawkeyes fans, WSU handed Iowa just its fourth home loss of the season and controlled the game from start to finish.

“It’s just so gratifying to see this young group do what they’re doing,” said WSU Head Coach June Daugherty. “No one cares who is the leading scorer, just survive and advance.”

The WSU defense continued its high level of play, holding an Iowa offense, which put up point totals of 95, 78 and 80 their first three WNIT games, to just 37.3 percent shooting from the field. Trailing 20-17 after the first quarter, the Cougars ramped up their defense and outscored the Hawkeyes in each of the final three frames.

Daugherty lauded the performance of lone senior forward Ivana Kmetovska after the game. Kmetovska had 14 points, six rebounds and four assists while tasked with guarding the Hawkeye’s physical frontline, including matching up with the Hawkeyes’ leading scorer, sophomore forward Megan Gustafson.

Daugherty said she told Kmetovska during the game she was the best front-line player on the court and to keep bringing it.

WSU continued its late-season offensive surge, scoring 65 points or more for the fifth time in its last six games. The Cougars had 16 second-chance points compared to the Hawkeyes’ seven, proving to be the difference on the scoreboard in an eight-point win.

The Cougars’ starting backcourt influenced the game in a variety of ways on both ends. Sophomore guard Alexys Swedlund hit her 70th 3-pointer of the year to break the school record for most in a single season and led WSU in scoring with 20 points.

“Once we got our defense going, our shots got going,” Swedlund said. “We’ve gotten this far, we might as well go the whole way.”

Iowa senior guard Ally Disterhoft, an Iowa City native, scored 16 points in her final game in front of her hometown, 11 of which came from the foul line. Gustafson led the Hawkeyes in scoring with 19 points on 8-13 shooting from the field.

WSU will fly to Atlanta to play the Georgia Tech Yellow Jackets (21-14) in the WNIT semifinals on Wednesday. The winner advances to play either Villanova or Michigan in the WNIT Championship on Saturday. Start time for Wednesday’s game is set for 4 p.m. PST.