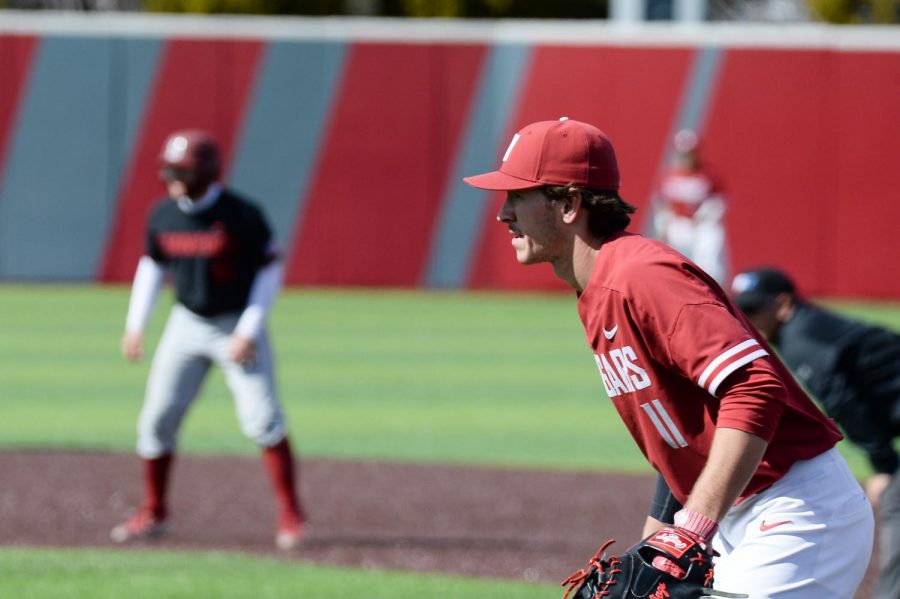 Junior infielder Dillon Plew crouches at first base as he watches the pitch during the game against Stanford on April 13 at Bailey-Brayton Field.

USC blew the game open in the second, scoring five runs off of three singles to take a commanding 6-0 lead.

The Trojans scored another run in the third inning and Head Coach Marty Lees pulled White out of the game after only 2 1/3 innings of work. White gave up seven runs and six hits and walked three batters. He was replaced by freshman left-handed pitcher Tyson Guerrero.

The Trojans didn’t let up on the Cougars and brought in two runs in the fourth and one more in the fifth to give them a 10-0 lead.

The bats were cold for the Cougars the entire night while the Trojans scored a run every inning except for the sixth, seventh and eighth.

Despite the loss, junior infielder Dillon Plew had a solid day, recording three hits in four at-bats. He also scored the Cougars only run of the game in the top of the eighth off a passed ball to make the score 10-1 USC.

WSU will take on the Trojans in the series finale 1 p.m. Saturday at Dedeaux Field.