Tennis falls to No. 13 UW in final regular season match 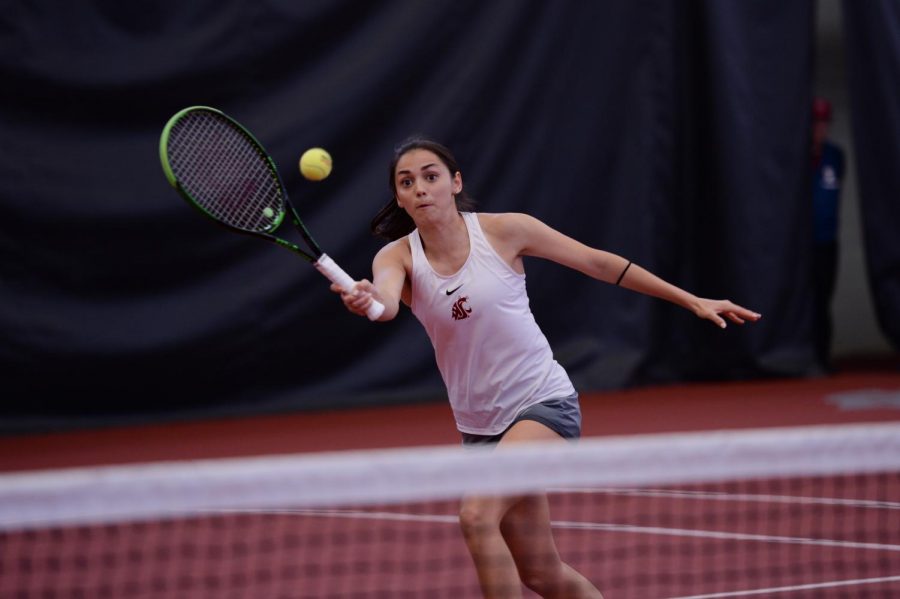 Junior Melisa Ates moves to hit the ball during doubles play against UCLA on April 12 at Hollingbery Fieldhouse.

After a long and emotional senior day, No. 35 WSU tennis suffered a tough 4-1 loss at the hands of bitter rival No. 13 UW on Saturday at Hollingbery Fieldhouse.

Seniors Tiffany Mylonas and Aneta Miksovska were honored prior to the match. Head Coach Lisa Hart said she hopes the other Cougars have looked to the seniors as role models.

“I’m proud of the way they’ve represented us, the way they compete,” Hart said. “I think our players can learn a lot from them.”

After the team gathered together to take pictures and hand out roses they were then delegated to play on the outside courts instead of the inside ones. However, rain changed those plans and forced them to compete indoors.

The Cougars’ (18-9, 3-7) energy was apparent to start the match as they fought hard to win the opening doubles point.

In the first doubles match, freshman Yang Lee and junior Melisa Ates struggled against the Huskies (18-3, 8-2) thanks to miscommunication, leading to them being shut out 6-0.

The remaining Cougar duos were in sync as Mylonas and freshman Hikaru Sato claimed their match 6-2 and Miksovska and sophomore Michaela Bayerlova took down the Huskies 6-3.

“We’ve been playing better doubles,” Hart said. “The last three matches were against top 15 teams so we’ve been playing at a pretty high level so I think it’s nice to get awarded that doubles point.”

After their doubles point loss, the Huskies bounced back in singles play.

The Cougars failed to earn a point in singles matches as the Huskies persistent pressure proved to be too much. UW quickly tied the score at 1-1 with a 7-5, 6-2 win over Ates.

The remaining matches all went to third sets as WSU battled to stay in it. Bayerlova, after winning the first set of her match 6-3, seemed to slow down and lost the second and third sets 6-2.

With the Huskies now up, every player was on their toes. Sato was fighting back after capturing a 6-2 win in the second set of her match to stay alive but she ultimately fell 1-6, 6-2, 5-7.

The crowd’s attention was now on Miksovska who was battling the Huskies for the fourth time in her college career.

After getting things done in the first set with a 6-4 win, Miksovska stumbled in the second to allow her opponent to force a decisive third set. The two went back and forth but UW edged out Miksovska 7-5 in the final set to clinch the 4-1 match win.

After the Apple Cup match concluded, Mylonas thanked the fans for coming to support her in the final home match of her career.

“It was nice to have fans and people there for us,” Mylonas said. “We had more people than other matches so that was nice.”

The Cougars will now need to recover after the loss and get ready for the Pac-12 Championships this Wednesday through Saturday in Ojai, California. WSU enters the tournament as the No. 7 seed and will face No. 10 seed Arizona at noon Wednesday.