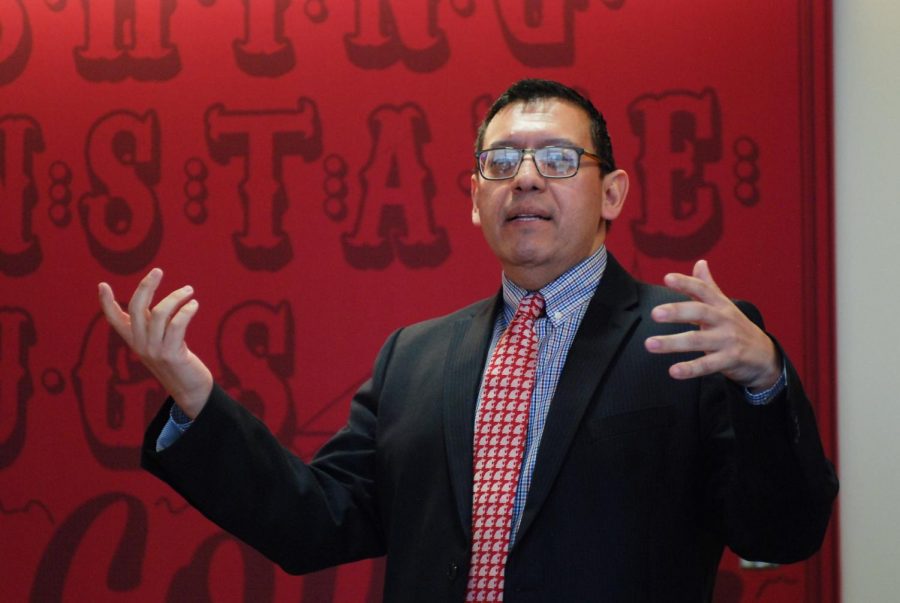 Enrique Romo, finalist in the Office of Outreach and Education leadership search, talks about his values and goals should he be elected during his presentation on Thursday afternoon at the CUB.

The second finalist for the executive director of the Office of Outreach and Education position, Enrique Romo, spoke to students and staff Thursday afternoon.

Romo currently works as executive director for access and diversity at Weber State University. He previously worked at the University of Texas at Austin as the director of the division of diversity and community engagement.

Romo said he mainly works with students, but he also works with staff, faculty and administration at Weber State. He said he wants to bring inclusive excellence training and coach certification to all WSU campuses from Weber State.

“I personally want our staff to not say to students, ‘Sorry, I don’t know how to help your needs,’ ” he said.

“I want to bring a partnership where we help students from seventh grade all the way up to their first year of college,” he said.

Heather McPherson, fiscal specialist for the Office of Equity and Diversity, said the main reason she wanted to attend the forum is because if he is chosen for the position, Romo would be her boss.

“I hope to see a lot of growth and hope for the future for the diversity of education to be addressed,” she said.

Romo said he wants to be seen as a humble servant to the duties of the role.

“I want my students to see me as someone that they can come to with all their needs, and if they need anything, that I won’t push them away,” he said.

Jaime Nolan, associate vice president for Community, Equity and Inclusive Excellence, said she is excited to review these candidates tomorrow and eventually make a decision with her colleagues.

“The way he was comparing the student groups between our schools was really interesting,” she said. “It made it feel like our schools have a lot more in common than I originally thought.”

Romo said he wants to bring a “do it better together” campaign to WSU. The campaign would require multiple people to help anyone in need but would focus on students and self-care.

“I want to make sure that all student groups are balanced when it comes to importance, so no one gets shadowed,” Romo said.