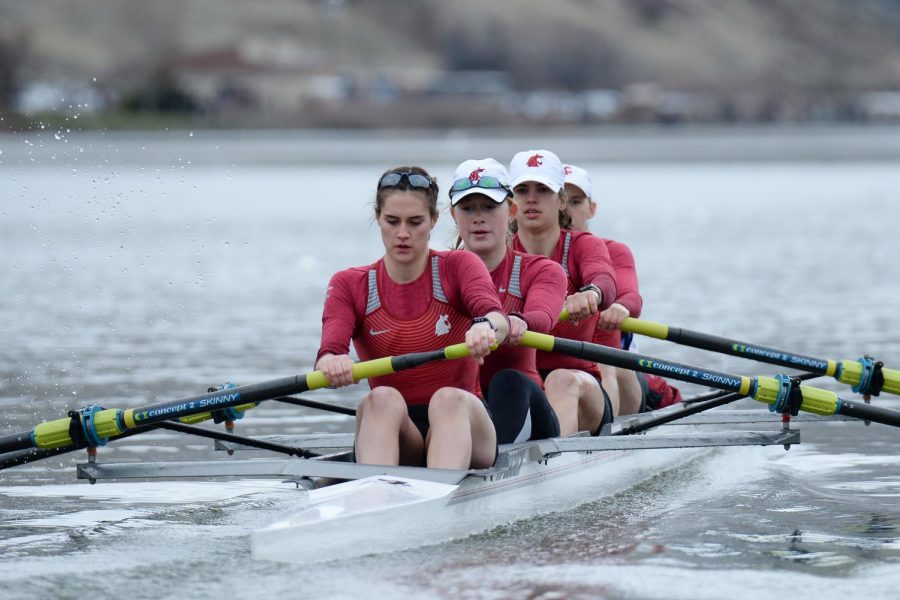 The WSU rowing team competes in a race against Oregon State University, Loyola Marymount and Gonzaga on March 24 at Wawawai Landing.

WSU rowing returns home for its final regular season contest on Sunday against Gonzaga before flying down to Sacramento for the Pac-12 championships.

This is the third time this season the Cougars and Bulldogs will clash and the second time at Wawawai Landing on the Snake River.

The Cougars haven’t competed against a team in a few weeks since the regatta in San Diego was canceled due to weather issues. Despite not competing in a while, Head Coach Jane LaRiviere said her team is still ready to win.

“Everyone is keeping their heads up straight,” LaRiviere said. “Their spirits are high, and they got to still practice racing which is helpful.”

Gonzaga found quite a bit of success this season and will pose an interesting challenge against WSU. However, the Cougars are close to sliding into the top-20 rankings and should also pose a threat to the Zags.

LaRiviere said this is a key regatta challenge and her crew needs to give their best effort to give them momentum for the upcoming championship in May.

“Having missed the Clemson races, this is a very important matchup,” LaRiviere said. “We’re really working hard now to get the right people in the right seats. Obviously, we want to take a run down the course and compete before the Pac-12’s. That’s why this is important.”

However, the Cougars may be more prepared than some may think as the second varsity four took home the gold medals in the last regatta down in San Diego where they faced some of the best teams in the country, including No. 1 Washington and No. 3 Stanford.

On the other hand, the Zags varsity group has struggled in their past two meets where they faced a challenge finding success down in San Diego and also placed last in every event last week in Sacramento.

The race kicks off at 9 a.m. Sunday at Wawawai Landing on the Snake River.