WSU falls to No. 1 Cardinal in second day of Pac-12 Championships, Hart says she is proud of her team 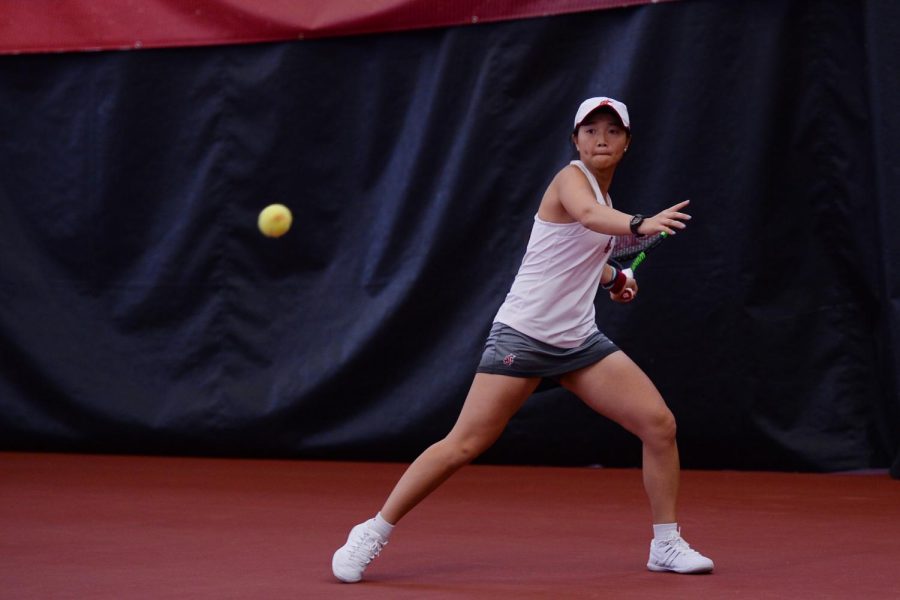 No. 9 seeded WSU couldn’t find success Thursday afternoon. They lost 4-0 in the quarterfinals match against the No. 1 seed Stanford. This is the third time this season the Cardinal has swept the Cougars 4-0.

Despite facing a tough Cardinal team, the Cougars were in the game mentally and were not backing down. Head Coach Lisa Hart said her team performed well against such a good team.

“Stanford is a very good team, and from top to bottom we played right with them,” Hart said. “In doubles, Tiffany [Mylonas] and Hikaru [Sato] had a huge win, and we had a chance to take the doubles point.”

The Cougars almost brought in the opening doubles point but a final push gave the Cardinal the opening day advantage. Senior Tiffany Mylonas and freshman Hikaru Sato came ready to compete and knocked the Cardinal down with a 6-3 win.

Meanwhile, the other pair of duos were both at a four-all draw. Senior Aneta Miksovska and sophomore Michaela Bayerlova fell away from their draw losing 6-4.

Junior Melisa Ates and freshman Yang Lee of WSU put up a 6-5 lead, but the Cardinal drew them to a 7-6 loss giving Stanford a 1-0 lead on the day.

After the close doubles, the Cougars struggled to keep up in singles play. Stanford continued to dominate and win the first set on each of the six courts to start.

With the entire WSU squad down, it did not look good for a potential comeback. The only set win accomplished by the Cougs was by Sato who, after losing 6-1 in her first set, came back and won 7-5 in her second. She would not finish her final set as Stanford slammed the Cougars down.

The Cardinal had put four Cougs into a set-point-win position simultaneously with seniors Miksovska and Mylonas as the first two to be taken down.

Miksovska struggled to get on the board as she got knocked out 6-1, 6-2. Meanwhile, Mylonas fought to a close 7-5 loss in her first set but couldn’t bounce back, losing 6-3 in her second set.

In the final matchup, Stanford was up 3-0 and needed one more set win. Ates came up just short, 7-6, as she previously did in her doubles set. She ultimately got taken down 6-3 in her second set, ending the day and the Cougars Pac-12 Championship run.

Hart said she loves how hard her team competed all season, and she’s excited to see what the future holds.

“I’m just so proud of how we fought today,” Hart said. “Now we will wait for the NCAA Selection Show Monday.”